Bringing Out the Artist in Me 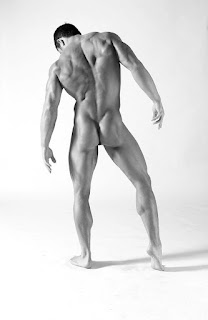 First, I want to bitch a little. A month or so ago, I got a notice that Google was no longer supporting our blogs and suggesting I try followit.com. Being a total klutz about things electronic, it took me weeks to even figure out what was happening. What was happening was that my blog dropped from 10,000 to 15,000 hits a month to like 5,000. I got hold of followit, but they spoke computerese—which I neither speak nor comprehend. Anyway, I want my readers back, but can’t figure out how to do it. I’m lousy at self-promotion.

Anyway, got some nice comments on “Petey.” After I wrote this week’s flash fiction piece, I realized I was hung up on college roommates and on unrealized gay longings. I guess that long ago roommate I told you about in the comments on “Petey,” were stronger than I realized. At any rate, here the new story. Hope you enjoy it.

BRINGING OUT THE ARTIST IN ME

I walked into my roommate's bedroom intending to ask if he was going to the ball game this afternoon. Johnny was a dedicated jock who wasn’t a jock—meaning he liked organized sports but only participated in the sandlot type—so I knew the answer, but I hadn’t heard him stirring even though it was approaching noon on a great October day. Just past the threshold, I came do a dead stop, although my heart went racing. Still abed and sleeping soundly, he had thrown off the covers and lay exposed. I gulped. He slept naked.

Unsure why my mouth went dry, frustrating whatever smart-ass remark I had intended to throw his way, I knew one thing for certain. This sleeping Adonis aroused the artist in me. On his side, facing me, the line of his hip was perfect, masculine. The rest of him? The epitome of the male form… rounded where he needed to be rounded, flat where he needed to be flat, and bulging where he needed to bulge. Unable to resist. I crept out of the room, collected my tablet and pencils, and eased back inside. Settling in a chair across from him, I preceded to sketch. Working soundlessly, I had virtually completed the drawing before his eyes fluttered open. He stretched, rolled over on his back, and gave a yawn before asking what the hell I was doing.

“I came in to ask if you were going to the ball game this afternoon, but when I found you asleep, I couldn't resist sketching you.”

“Well, you didn't have one when I first came in.”

He glanced down at himself, “Do now. Gotta go take care of it.”

He bounded out of bed, a movement of pure macho grace, and strolled past me on the way to the bathroom. I had seen Johnny naked a hundred times during our two years of rooming together at Elmore college, but never had it affected me this way. We’d always snapped one another’s butts with a towel or joked about this part of the anatomy or the other. But as I sat in his room filling in details of the sketch, shading here erasing there, as needed, I felt a reaction of a different sort. Like Adam eyeing the forbidden apple or a man seeking to grasp the Aurora Borealis.

He was gone for quite a while but eventually returned, still is bare as the day he was born. I took notice of his backside and decided it deserved a sketch of its own. What would he say if I asked him to pose?

Johnny scratched his chin—he’d taken time to shave and clean up. “To answer your question, I’m going to the game. You wanna come along?” He knew I wasn’t as sports oriented as he was.

“Yeah, I’ll go with you. But I'd like to do something first.”

“Naked, I presume. I thought I just did.”

“I want you to stand with your back to me. Will you do that?”

“You already have a full frontal, so I don't see why not.” He spread his feet, put his weight on one foot, and looked down and to the left. He looked so manly, I clearly and unequivocally experienced arousal of a different kind. Nonetheless, I turned to a new sheet in the pad and began drawing. Surprised to find sketching the curve of his buttocks gave me an erection, I felt like Pan lusting after Echo—okay, that doesn’t work because Echo was female. But the object of my heretofore unrecognized hunger sure wasn’t of the feminine kind. I found it increasingly difficult to concentrate on the sketch. Nonetheless, by the time he started twitching with impatience, I was virtually finished.

As he turned and started toward me. I couldn’t help but notice he was a little tumescent. Avoiding looking at him, I concentrated on putting finishing touches to the sketch. He reached my side and stood so close I could feel the heat of his body. I found myself wanting to touch him. But I didn't know how. Johnny tended to overreact sometimes, and I didn’t want to be on the wrong end of that.

I flipped the sheet and turn the sketchpad sideways to show him the drawing I had made while he slept. Would he object to the amount of detail I’d included?

I forced a laugh through my bone-dry throat. “I hope so. I wouldn’t be much of an artist if you couldn’t.”

He turned toward me as I spoke, placing his crotch so close and yet so far. I had never wanted to touch a male before, but I had to grit my teeth to avoid reaching out to him. It was like the call of Excalibur to be plucked from its stone.  I didn't think I visibly reacted, but his next words told me he read me perfectly.

“Go ahead, Brad, I know you want to. I've seen it in your eyes before and wondered why we wasted so much time.”

I swallowed hard and ventured to wrap my arm around his leg. The strength I sensed beneath my touch sent shivers up my back. “If that's so, why didn't you make the first move?”

“Dunno. Wasn't sure I was reading you right. You can be awfully straightlaced sometimes, you know.”

He shifted a little so that he was closer. He was reacting to my nearness, just as I had to his. Suddenly tired of playing games, I reached out and pulled him to me.

That day… at that time, Johnny brought out something other than just the artist in me. Neither of us spoke. It was all by intuition. Johnny had always been a generous guy, and he was certainly magnanimous to me that day. So much so, I was in no shape to go to the stadium that afternoon. Neither of us was. We’d found our own field of play and romped to the point of exhaustion.

But Johnny was right about one thing. Why had we wasted so much time?

I asked for comments on "Petey" about stalking and got a couple who said they’d never been stalked, nor had they stalked. I really question that response. At some time during a guy’s life, he’s been the object of someone else’s unstated adoration, meaning someone had kept silent, but found a way to stay close to him. Even to the extent of following him once or twice.

And I likewise think everyone’s been sated with another human to the point that he or she found ways to be present whenever the object of desire showed up. I recall in high school when I was bewitched by a younger jock named Roger. I contrived to be where he was whenever possible, but always remained afar and never spoke to him. I doubt to this day he recognizes that he was stalked. More to the point, I didn’t realize that was what I was doing at the time.

As to Johnny and Brad, tell me what you think.