The photo that follows is the old cover. He hasn't received the one for the upcoming book as yet. 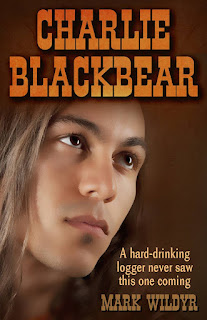 Thanks for your comments on “The Tease.” I get most of my comments on Facebook or on my private email (given below), so my online remarks are virtually non existent.

My writing buddy Mark Wildyr has a re-release of his Charlie Blackbear novel coming up soon. Right now he’s in the middle of his “Gabacho” story on his own blog, so I told him I’d allow him to do a guest post if he wanted. He accepted. Ergo, this week’s post will be the Prologue and part of the first chapter of his book. WARNING: Mark’s writing is pithier than mine, so be prepared.

Without further ado, let’s get started.

A key in the door brought him half awake. He blinked and rubbed his crusted eyes. It looked like morning on the other side of his lids. A maid entered, gasped, and backed out quickly. The light from the doorway before she shut it behind her like to of turned him blind. He looked down at himself. Nekked.

His mouth was dry. Hard to swallow. Head throbbed. Man, musta been some drunk. Wished he could remember more of it. Where the hell was he, anyway?

Despite the headache, he tried to remember. Something about passing out and getting left behind. Started walking. Caught a ride. Yeah, that was it. Some white dude gave him a ride to town. The guy had a motel room where they could sack out for the night. They’d shared a bottle before the lights went out.

Suddenly he bolted straight up on the mattress. Son of a bitch! He remembered coming awake creaming in the bastard’s mouth! Then what? Shit, he’d passed out again. He scrambled out of bed, but the guy was gone. Cleared out.  The dude had left a message and a couple of twenties. He got pissed off again reading the note.

You were wonderful. I’ve never had an experience like last night before, and I’ve had a few in my life. Such magnificent equipment! You don’t run into many uncircumcised these days. You’ve got something to be proud of there. So young, and yet so well-endowed. It must have been good for you because you ended up whooping and hollering.

I hope you don’t mind, but I used your leg after that wonderful experience. I tried to do it again for you this morning, but you didn’t get hard, so I just stood beside the bed looking at your angel face and hunky body while I took care of myself. Hope I meet you again someday. I left a little something for you in gratitude. I also paid another day on the room in case you wake up after checkout time. So you have the room for another night if you want it. Wish I could be here with you.

He tossed the note aside. The fucker’d bought and paid for him. Used him like a whore. Skin crawling, he rushed to the shower, lathering up and scrubbing so hard his skin was raw. Then he stood under the pelting water, drawing a breath that was almost a sob.

Shit! He wasn’t a fucking queer.

April 4, my eighteenth birthday. Took its own sweet time rolling around. Talk about Indian time! They was pretty good years, till a drunk ran my old man off the road two summers back. They always talk about drunk Indians killing white folks. Well, this whitey wiped out my mom and dad, two brothers, and an aunt. Only reason I not laying over in the graveyard with them, I was out to my uncle’s place helping him catch a pony. Been with him ever since. My aunt was his woman, and since they didn’t have kids, him and me was all we had left.

At first, things was okay with him, but then he took to the bottle to make the hurt go away. Damned near everything went but the hurt. His old pickup broke down and was rusting away on blocks in front of the house. His job dried up. They couldn’t abide never knowing when he’d show up. His horses got sold for bottles of booze and cases of beer. The last thing to go was him caring for me, but that was dead too. We was nothing but a habit now. Oh, we got along okay…except when I try to steal his bottle. And that was whenever I could.

Only reason we’ve still got a roof over our heads is we live way out in the boonies on this little Indian reservation. When the pickup went down, I scrounged a bicycle from the dump and fixed it up enough to get around. It’s got harder to do lately, because things leaned up a bunch last winter, and riding that bike sure worked up an appetite.

Toweling off from a bath, I examined myself in the cracked mirror. What I saw looked Grade-A-Choice-Prime. I’d been fed good till the accident, so I was filled out like a full-grown man. My belly was sorta gut-shrunk since coming by a meal got harder, but my chest was deeper than most guys I know. I like my face and thick black hair, and from the way girls came on to me they must like it too.

I figured out my cock was good for something besides pissing the year I turned thirteen with Mazie Longbow out behind the scrub bushes at Rock Springs. It was big even back then. Pretty soon I heard it was going around that I had the biggest one in school. After that, I got my candle lit pretty much whenever I wanted.

In fact, the big fucker kept me in booze and groceries last spring when I ran onto this white woman in town looking for somebody to take care of her yard. I piddled around in her lawn grass until she invited me in for a cold drink. After that, I took care of her belly grass for the summer. She couldn’t believe it when I told her I was just seventeen; course, I look a couple of years older’n I am. She claimed I looked and screwed better’n any man she ever knew. I was sorta sorry when she’n her old man moved out-of-state, even if I was getting kinda tired of showing up once a week. Too much like a job.

Funny thing. I’ve never had a steady girl. Never did form a real attachment to one. I’d latch on real tight for a couple of weeks, making her feel real special, and then start looking around for another one.

Most of my buddies were guys who’d hang around and drink with me after my folks was gone. Couldn’t get away with it when they were around. Not too hard to get hold of alcohol even if this is a reservation and I’m underage. I got real close to a couple of guys—drinking buddies—but it only lasted till one got serious about a girl. Then I’d forget him and go hunt up another best buddy.

I have to admit getting taken care of nowadays wasn’t as easy as it used to be. My own fault. I’ve been through all the available girls on the reservation and in Blue Valley, the town just outside the rez. I had a reputation now...love ‘em and leave ‘em. So except for three or four who always give it to me when I’m desperate, my wick wasn’t getting dipped much without going to new territory.

Well, today Charlie Blackbear was going to new territory. Charlie Blackbear, that’s me, eighteen-year-old-Plains Indian super stud. There was a powwow over at Flynn’s Corners about a hundred miles down the road, and I was gonna find me something new. If I was lucky, I’d latch onto a white woman who liked red meat so I could put something in my pocket alongside the lone dollar bill already there. Then I’d hunt me up some of the Native fluff I liked and treat myself to a birthday present.

Sounds like Charlie’s going to town. But our young stud may have some surprises in store. Watch JMS Books for a release date on Mark’s novel.