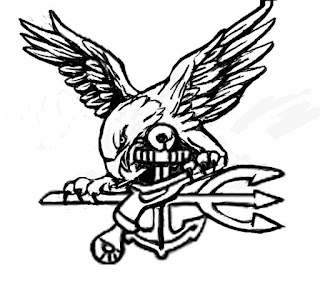 Last week, Daniel Chamberlain, an ex-seal turned mercenary, had returned home after a fifteen-year absence upon losing his lover in a firefight. The little kid next door who used to idolize him in his teen years, has grown into a handsome, hunky young men. Markey’s vulnerable, but can Daniel get over his loss and become a man again? 15 years to find Marcus Markey, the little kid who’d idolized him, had grown into a handsome, hunky young man. But Daniel, an ex-SEAL turned mercenary had lost his lover, another ex-seal, in a firefight. After a hunt, Daniel and Markey bathe in the river and things get tense. Daniel has just asked Markey if he was thinking of joining the SEALS, and Markey answered with an enigmatic comment that he wouldn’t fit in.

I left that remark where it was, and we sat around languidly nipping at the beer, me relating carefully selected bits and pieces of the last ten years while the night slipped away. I even told him a little about Beet.

“His last name was Borak, and that’s Polak for a beet farmer.” I tried to bleed the emotion from my voice. “He was a great guy.”

“Sounds like he was your bud. You know, your pal.” He paused before adding. “Special.”

“Yeah, he was. I mustered out and turned mercenary with him. That’s how special he was.”

“Guess guys get close like that when they’re living and fighting together.”

“It happens,” I allowed. Had he sensed our true relationship?

“You ever kill anybody with your hands?” Another one from out of the blue.

“Yes,” I answered quietly. This was getting a little intense.

“How did you do it?  Cut the guy’s throat?” I shook my head mutely. “Then how?  Show me.” He looked stricken. “Sorry, didn’t mean to get so personal.”

I tried for some humor. “If I show you, I might get carried away.”

“That’s okay,” he responded. “I absolve you in advance.”

“You might, but the law won’t. Stand up,” I ordered, my voice a little sharper than intended. As he rose, I slipped away from the fire and melted into the trees. A second later, I heard him call to me.

I silently circled the camp. From his occasional shouts, I judged he was growing nervous. This wasn’t the way he had planned for the game to go.

Understanding he would shift his stance continuously to watch for me, I eased behind a fat water oak directly to his left. When he turned to check another direction, I slipped up behind him and threw my left arm around his throat. My right thumb pressed gently against his carotid. He gave a strangled gasp and started to struggle but quit when I pressed harder. His artery pulsed wildly beneath my thumb.

“That’s the way I did it,” I whispered with my lips against his ear. I eased the pressure but was loath to release him from my embrace.

He leaned against me in relief. “You scared the hell out of me, man. But…but it was sort of exciting, too. I didn’t even hear you. I knew you were coming, but I never heard a thing.”

“You weren’t supposed to.” My index finger flexed involuntarily against his cheek, caressing the light stubble of his invisible beard. His hair smelled clean and masculine. The length of his body rested against me, setting my groin afire. Abruptly, I released him and stepped away before any damage was done. “That’s the way I did it,” I said again.

“Awesome!” He rubbed his throat where my arm had been.

“No, it was horrible. It’s an incredible high until you realize the thing lying at your feet had been a living, breathing man. Then the excitement leaches away fast.”

“No sane man likes it, Markey. And I certainly never did except—” I bit down on my tongue.

“Except when I was killing the animals who slaughtered my…friend. And I wasn’t too sane at the time.” I drew a shaky breath. “Well, I’m turning in.”

“Yeah, me, too. It’s been a full day with my first buck and all. And…well, being with you. You know, hearing about your experiences.”

“For me, too. It was good to see what kind of a man the kid next door grew up to be.”

“Why would you say that?  You’re a handsome, healthy young man and a good person as far as I can see.”

“Anything you need to talk out?”

That slight hesitation and shake of the head again. “No. I’m okay.”

Deciding to let him off the hook, I stripped to my skivvies and slipped into a sleeping bag laid out in the back of my SUV. Markey’s white jockeys made his flesh seem even darker as he crawled into his own fart bag beside me. We said our goodnights and a silence grew, broken only by the call of night creatures and the squawk of a loon somewhere at the far end of the lake.

“Daniel, is it true they drown proof you in BUD/S?  How do they do that?”

“They tie your ass up and dump you in the water. The first thing you learn is not to panic. When you get over being afraid, you learn to bob your way to the surface and to the shore.”

“Yep, just not as graceful.”

He let the silence go on longer this time. “Daniel, I…I missed you, man. Thought about you a lot. Your mom used to let me read your letters.”

“No you didn’t. You were out there doing all kinds of exciting things. You didn’t think about the pesky little kid back home.”

“You’d be surprised. Mom kept me up on your life. I even have some pictures she sent.”

“You do? Which pictures?”

“Photos of you in your football uniform, your graduation, things like that.”

“Awesome. I thought you’d forgot all about me.”

“No way, kid. You were my little brother, you know.”

“And you were my…” The voice died away.

I turned to face him. “That’s not what you were going to say, is it?”

He dipped his head. “Daniel, if I tell you something, will you hate me?”

I chuckled softly. “I could never hate you, Markey.”

“Don’t be so sure. But never mind.” He flopped over on his side.

I clasped his naked shoulder, pulling him onto his back. “Not so fast, buster. You can’t give an intro like that and then just walk away from it. Say it, Markey, and trust me to handle it, okay?”

“I…” the voice dropped to a mumble. “I have feelings for you.”

“No!” he cried in an anguished voice. “Not…not like that. I have feelings for you! I want to do things with you. But…but I don’t know what!”

I swallowed hard. “What are you saying, kid?”

A silence grew. Well, you fucked that one, Chamberlain. I was debating pushing him some more when he spoke.

I sensed rather than saw his shrug. “Different.”

“Everybody’s different, Markey. That’s what makes us who we are.”

I threw back my sleeping bag and came up to rest on my elbow. “Okay, man, it’s time to talk turkey here. Say what you mean.”

That one hit me between the eyes. “You try it with another man. If you want to slug him when it’s over, then you’re not. If you don’t give a shit one way or the other, you were probably just experimenting. If you can’t wait to try it again, then you probably are.”

He turned to face me, and even in the faint light, I saw him examine my naked torso. “Who do you try it with?”

“Someone you like. A buddy. Someone who won’t go berserk on you afterward.”

His Adam’s apple moved. “Can I try it with you?”

“I love you, Daniel,” he said so softly I wasn’t sure I heard him right.

“No. I’ve loved you since before you went away,” he said, swiveling his head away from me.”

“You were only eight years old then.”

“Didn’t matter. I still felt that way. Thought maybe you felt it back. Nobody ever treated me like you did. Practically like a grown up…like you were.”

I laughed softly. “Shit, I wasn’t even a grown-up myself.”

“You were to me…the most grown-up guy I knew.”

I put a palm to his cheek and turned his head to me. Silver shafts of light in the onyx corneas made them gleam like black fire.

“Remember how I used to feel your muscles after we worked out? I always hoped you’d feel mine back, but you never did.”

“Did you?” he asked, flopping on his side to face me.

“Yeah, but I didn’t have the nerve. If I had touched you, something would have happened, and you were too young. Hell, you probably didn’t even know anything about things like that.”

“Then how come I’d go home and play with my pecker afterward? The first time I came, Daniel, I was thinking of you.”

I didn’t know what to say, so I kept my mouth shut.

It seems some military demonstrations have turned into something quite different. It’s clear that Markey is willing…anxious even, but Daniel?

Email ThisBlogThis!Share to TwitterShare to FacebookShare to Pinterest
Labels: Gay yearnings, Love Lost, Markey and Daniel, The kid next door