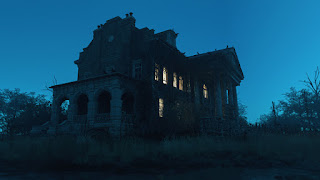 It appears to me that our protagonist last week chanced upon a fairy fairy. Sorry, couldn’t resist that.

This week, we’ll stay with the mystic a bit longer. Tell me how you like this offering.

The path, rocky and uneven, made it difficult to find my footing given the shadows thrown by the surrounding forest and the fading light as the sun began its journey below a horizon hidden by towering trees. I cursed myself for not having returned to the house to saddle Thunder or harness one of the carriages. But I had already been far afield on foot when I cottoned to the time and grew aware of the approaching hour the summons from his lordship had specified. Faster to complete the trek by foot.

And so it was, but I would arrive flushed and unseemly and likely be required to remain overnight. Nay, I’d borrow a steed for my return home. Earl Harold was not an onerous liege, but I preferred other company. And why was the “invitation” for me alone, excluding my father… even as a courtesy? Word would have reached the manor by now of the delirium in possession of my sire. By rights, I should have ignored the Earl’s message and remained at Father’s bedside.

I broke free of the woods and paused at the edge of the broad expanse of lawn surrounding the pile of stones called High Wethersby Hall. Dark turrets husbanded the gathering gloom while tall spires desperately clutched at the last rays of the dying Sol. A dismal place despite flickering lights at many of the windows.

Before stepping from the tree line, I caught sight of an indistinct figure near the east corner of the building. I drew breath to hail the individual, but my call died in my throat. One blink of the eye… and the figure had disappeared.

“My word, that was odd,” I muttered to myself. But perhaps not. The man, and I was certain the figure had been masculine, had been near the corner of the manor house and likely simply stepped out of sight. Resisting the urge to check on a possible intruder, I maneuvered the grassy lawn to the graveled walkway leading to the front door of the hall.

Why did I assume it was an intruder? It could have been a servant, a groom, a guest. Almost endless possibilities loomed, yet “intruder” stuck in my brain. That being said, there was something oddly familiar about the phantom. My father! He had moved like my father in his younger days.

One of the earl’s servants answered my knock and stepped aside with a mumbled acknowledgment, “Master Saxon.”

I handed him my cane, alas my hat remained on its customary peg at home. “Evening, Pushkin. I am here at the invitation of his lordship. But I need a place to wash up and make myself presentable.”

“Yessir. His lordship is expecting you. Right this way.”

Once he showed me to a small side room with washstand and toweling, I dismissed him upon learning my liege was in his library. So it wouldn’t be a family visit. That would have been held in the drawing room. My curiosity heightened as I washed my face and hands free of dust and combed my mop of hair into some semblance of order.

Earl Harold did not rise to greet me as I entered the library. He merely glanced up from a ledger, snatched off his reading spectacles, directed me to a seat opposite his escritoire, and leveled a look at me. I took in his lean features, frizzy hair the color of ashes, and firm downturn of the mouth. This was not a social call.

“Josiah Saxon, there is no possible excuse for your behavior.”

I straightened in my chair. “I apologize, sir. I came here directly from the fields.”

“I’m not talking about your dress, man. I mean your behavior.”

“I don’t understand. How has my behavior proved offensive?”

His lordship’s cheeks took on color. “Playing the Peeping Tom on my daughter and her friends is not offensive?”

“Don’t bother with denials. My daughter saw you clearly, as did her two friends.”

I gasped. “Lady Esme saw me intruding on her privacy?” Not that I wouldn’t have liked to cast gazes on that fair flower and inhale her perfume, but this was a false accusation.

“Precisely. And she called you out on it.”

I gained my feet and stood ramrod tall. “Milord, I was overseeing work in our fields for the entirety of this day. In fact, I walked to the hall directly from our northernmost pasture. If I have given offense, it was not by spying on Lady Esme and her friends.”

“You dare to stand there and deny your perversions?”

“Aye. I do. Because the charge is patently false.” I hastened to correct my language when the earl came halfway out of his chair. “Lady Esme is simply mistaken. May I not ask her about the incident?”

The earl didn’t stutter, but he came close. “Y-you want me to involve my daughter in this offensive discussion?”

“I should merely like to assure her I would do no such base thing. I believe I can convince her of my innocence. And you, as well, sir. I was in full view of several of our laborers for a good part of the day. The remainder of the time, I was tending my father, who is ailing, as I’m sure you have heard.”

“I fear that is true. He’ll be taken from us soon. In a way, he already has been.”

“He lives, but he lives in the past. He talks to my mother and my aunts, all of whom are long gone. He will join them soon, I fear.”

“Josiah, you and your father have my sympathies, but his impending loss does not release you from the consequences of your behavior.”

“Milord, may I be so bold as to ask a boon? Allow me to return home. Once my father’s situation is resolved—one way or the other—I will return and make my defense against these charges.”

The earl stood and delivered me a long, uncomfortable stare. “Very well. Go home to your ailing father. Once that ordeal is over, we will talk again. You should know that my intention was to have my servants place you in a carriage and deliver you to the proper authorities. But that can wait.”

Given the circumstances, I could neither remain in the hall overnight nor request the loan of a horse to ride home. Thus, I departed the same way I had arrived, on my own two feet.

I had nearly gained the cover of the wood when I heard a voice behind me.

I whirled at the familiar voice to find my mother standing behind me. My breath deserted me. My ma’am was taken away a decade ago by a fever. “M-mother?”

She stepped backward when I moved toward her. “I apologize for your troubles. This should not have happened. It’s all your father’s doing. Joseph should simply have gone easy. Instead he’s fighting, calling on us.”

“No, I suppose you don’t. But….” She halted and inclined her head as if listening. “It’s your father. Joseph needs me now. Goodbye, son.”

As with the apparition near the manor earlier, one blink of the eyelid and she was gone. Staggering as if dealt a body blow, I reeled on toward the waiting path. I needed to get home. Make sense of all this. “Hurry, Joss, hurry,” I muttered to myself.

A deep voice, also somewhat familiar, came near to costing me my balance. I steadied myself and turned to face whatever was there.

What was there was me. Well, almost me. By a full moon’s glow, I perceived hair darker than my brown.  A noticeable lentigo adorned his right cheek. A fraction taller.

“W-who are you?” I managed to get out, despite paralyzed vocal cords.

“I am Jacob, Josiah. Your brother. Your twin.”

“I have no brother.” I struggled to put conviction into a faltering voice.

“Aye, you have. Or had. I died at birth. And the family concealed the fact from you. You see, I strangled on your umbilical cord, and they sought to spare you guilt.” The man, creature…apparition, gave me a speculative look. “I’m pleased you grew up to be a handsome, well-formed man.”

“Because that gives me form, as well.”

“Who invaded the lasses’ privacy? Alas, I’m afraid so. I’ve been denied so much and have so little time to satisfy a myriad of curiosities.”

So many questions flew around in my head I grew addled. But Jacob, seemed to know them.

“It was our father. In his dying delirium, he summoned me. Me and mum.” His expression grew sad. “I’ll go when he does.” His image flickered. “And I fear that will be soon.”

His image faded alarmingly. The voice weakened. “Not enough time, I suspect.”

And then I blinked. He was gone.

As the import of his disappearance struck me, I lurched down the dark, wooded path toward home, knowing full well that my father had died.

Another thought struck like a pole ax between the eyes. How would I ever convince Lord Harold—or the authorities—of what actually happened?

I’d say our protagonist is in quite a pickle. And I haven’t figured out how to get him out of his difficult situation. Can you? Suggestions welcome.