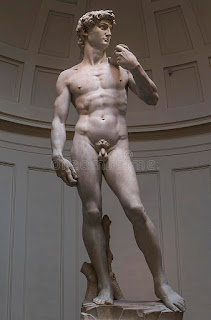 Last week, we met Martin, the budding sculptor who was obsessed with Michaelangelo’s statue of David, which he saw as a prepubescent on a family trip to Florence, Italy. Now a working sculptor, he’s constantly on the hunt of his own “David.” At the end of the first part of the story, it looked as if he might have found him. Let’s see what happens next.

And then—serendipitously—he arrived on my doorstep… or garagestep, to be more accurate. One warm, spring day, as I worked on a big piece of alabaster, a shadow distracted me. I glanced up to see a perfect male form silhouetted in the open garage doorway. Broad shoulders, narrow waist, hips an ideal ten percent wider than the waist, strong thighs. Wow! Move on inside, dude, so I can get a better look.

“You do good work, man.” The voice was not quite a bass, but it sure was a low baritone. The speaker moved forward. “You mind if I take a closer look?”

I cleared my throat to moisten a dry mouth. “Not at all. Come on in.”

Despite my cordial invitation, I sorta hated for him to move. To see this paragon’s features clearly was bound to be a letdown. Nobody could have total physical perfection. Nobody.

As he moved into the more controlled light of my studio, I saw how wrong I had been. This guy was downright stunning. Big dark eyes, curly hair so brown it almost looked black, clean-cut cheeks, and lips so ripe and juicy I wanted to walk over and kiss them. Probably not the thing to do as this guy had muscles. Genuine muscles from genuine hard work, I’d wager.

He bent to examine the work. “I see a little boy, but—”

“He’s playing with his puppy. Or he will be when I finish.”

“Wish I could do something like that,” he said, straightening and meeting my addled gaze. Domination from the very first look. I’d have done anything he asked at that moment. “Maybe you can,” I managed to get out.

“Naw. Tried my hand at painting and found out all I can paint is a wall or whatever needs a coat.”

I kept at it, babbling about how he needed to try harder… anything to keep him from leaving. Finally I ran out of things to say, so I stuck out my hand.

“James Slaker, but everyone calls me Slake.”

Wow! What a grip.

“You got a good grip,” he tossed at me, taking me by surprise. His words mirrored my thoughts. “Must be from slinging that hammer and chisel or whatever you do all day.”

“Probably so. Where does yours come from?”

“My what? Oh, you mean my grip? Hard work, man. Just like you do, except I push lawnmowers and hammer nails. You know, stuff like that. We oughta arm wrestle sometime and see what comes out on top, hammers or lawnmowers.”

I smiled at the thought. “Anytime you want.”

He glanced around the studio. “I’d really like to see more of your stuff, but I’m on the clock now. Okay if I come around sometime and take a gander.” His eyes went wide at a thought. “Not looking to buy, you understand. I couldn’t afford anything this good.”

“You can come around anytime you want, buying or eyeing, doesn’t matter.”

“Hey, you’re a poet!” he said on the way out. The rear view was as great as the front.

I later learned James Raker was the landscaper my landlord hired to take care of the grounds of his place, which included the garage I’d rented as my studio. That meant I’d see more of the gorgeous dude. I could hardly wait until next week when he’d show up again.

But I didn’t have to wait a week. Saturday morning, I chiseled away at the alabaster, doing delicate work: the dog’s slender, fragile legs as he stood on his hind legs, pawing at his young master when a voice with a sexy growl startled me.

“You’ve made a lot of progress since I was here the other day.”

I snatched my hands back before I made a mistake at this crucial juncture. Turning, I smiled at him. “It’s Slake, right?”

“He moved inside and gave me a thumbs-up. “Right the first time. Martin, right? Or is it Marty?”

“Martin,” my lips said while my mind declared he could call me anything he wanted.

I watched him as he studied some of the pieces I still had in the studio. I always let them sit around for a week or so before taking them to the dealer who handled my art. My fingers itched from the desire to run my fingers over him.

“Martin, it is. Man, you really do great work.”

An idea snapped full born into my head. “When I finish the kid and his puppy, I’m going to do a full-sized figure. A man. A young man who’s built. And I’m still looking for a model.”

He half-turned to look at me. “You saying you want me to model for you?”

“I donno. I’ve never modeled for anybody. What’s involved.”

My mind said “everything,” my mouth said, “Doing a little boring sitting around while I chisel away.”

“Do I have to stay in one position without moving?”

“Naw. Just same general position. Every once in a while, I’d have to come over and touch you. I do that when I’m having a problem getting something just right.”

I moved over to him and laid a palm on his right bicep. “Like this, to get the feel of the muscle. Get the angle right.”

“That’s it. I’d block out the general shape, and then you’d sit on that stool over there while I refine it, you know, work the stone down the way I want it.”

“That depends on how well I do. Probably a minimum of ten. I can do a lot of the work without you here, but in later stages, you’d have to be here.”

“Haven’t made my mind up. What’s your sport?”

My eyebrows shot up. He looked beefier than most runners I knew.”

He laughed. “Yeah, I get a lot of looks like that. I’m not as heavy as I look. I built up my arms and chest more than most runners, but I can still move.”

“You have running shorts?”

He hesitated. Yeah, I guess so. When?”

“How about tomorrow? I’ve got a rest room over there where you can change into your togs.”

He pursed his lips a moment. “Okay. What time.”

At this point, what would you say Martin’s intentions are? At any rate, it looks as if he’s hooked his “David,” next week we’ll see if he lands him.