The Death of a Son 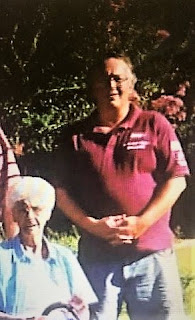 The following says it all, so lets get right to it.

THE DEATH OF A SON

This is the most difficult writing I have ever done, and it has taken me four different tries over better than two months to accomplish it.

Had you asked me, I would have said I handle the deaths of those close to me pretty well. I grieve—as we all do—then assign the event its proper place in my life. I call up occasional recollections of those gone and enjoy the remembrances—or suffer through them—and then move on. In that manner, those I have lost who were dear to me become “escapes” from the daily rigors of life, people to be treasured and enjoyed, and who sometimes show up in part or in whole in my short stories and novels. That was the case with my wife, parents and grandparents, brother, other relatives, and cherished friends. Not so with the man in the photo above. This one was much harder to face.

On January 22, 2021, the elder of my two sons Clai, died in Christus St. Michael’s Hospital in Texarkana, Texas of “sepsis.” The lady beside him is my mother.

I don’t want this to be the typical “obituary” type of piece. Rather, I prefer to use this time to pay honor to a man many would consider a failure. In the sense that he died without an estate, living on disability in a low-income housing unit without spouse or issue, perhaps he was. His immediate family was a little dog named Buddy who loved him as devotedly as he was loved. But there was another side to Clai.

First, a little background. Ours was the typical dysfunctional family, and I use those two words deliberately—as I’ve grown to believe that when you really take a hard look at them, the dysfunctional family is the norm, not the extreme. I bear a significant share of the blame for that situation in our little clan. I came out of a time and culture where the man worked, and the wife bore children and saw to their upbringing. So I became a workaholic, believing that providing for them was a sufficient contribution. Thus, I wasn’t around enough to understand my wife—now gone for 12 years—was having problems of her own. Willful blindness or deliberate? I honestly don’t know.

Clai arrived in this world on May 14, 1960 in Denver, Colorado to face an uncertain future after a twelve-hour battle to see the light of day. His health was frail in early childhood. He had an operation before he was six months old. Let’s face it because of this he grew up a coddled mama’s boy. That ended shortly after he graduated from Menaul High School in Albuquerque. He had an increasingly contentious relationship with his mother, and consequently with his family. The one constant in his life was his grandmother—my mother—in far off Texarkana, Texas. By now Clai was a mechanic by profession—and a good one, I’m told—but his problems, social, emotional, and physical, mounted. He became an alcoholic, developed learning and social problems, He was always the guy standing on the outside, looking in. And then a chronic back problem—only partially corrected by an operation—and a diagnosis of Dissociative Identity Disorder (what we used to call Multiple Personality Disorder) rendered him disabled. He could do a job for a short period but couldn’t hold a job.

One day, he called us from Texarkana, Texas to let us know he’d moved there—no warning, no planning. He simply pulled up stakes and left to get away from his mother, or so he claimed. The only place he knew to run was to the woman who always seemed to be there for him (at least in a long-distance relationship), his grandmother. She remained his rock until her passing just shy of the age of 97 not long after the photo above was taken.

By the way, I also think he considered his name a disability all its own. The spelling of his name with an i instead of a y was taken from his mother maiden name of Claiborne. He complained he always had to deny he was “Clair.”

Now let me share why I consider this as an honor to his memory. When he died, Clai had his medallion from Alcohol Anonymous for 23 years sober. He had been a sponsor for many years in the program. Living on fewer than $950.00 a month isn’t easy, but Clai learned to budget and managed to do so—after kicking a lifetime habit of lusting after every car he ever saw. Despite his back problems, he kept his 2000 Ford Focus running. Even on his tight budget, Clai was always willing to give someone a ride, and in doing so, developed a few good friends. He repaired his relationship with me and taught me a lot about vitamins and supplements. He was increasingly successful at keeping his six or so other personalities at bay for longer periods of time. Addressing a growing weight problem, he battled his way back down to 180 pounds, until the sepsis added 40 pounds of fluid in his last weeks. He dealt with two heart operations essentially alone. No matter how ill he was, he always made sure Buddy was taken care of. An agnostic for years—acknowledging only the AA’s “higher power”—Clai became a believer. In recent years, he often said he’d have to “pray over that.”

To many, this might not appear to be much of a life, but to me, it seems as if my son overcame immense adversity to end up a decent man. I commend you, Clai. I miss you. I love you. Know that when the weather turns warmer, your brother and I are going to the Jemez Mountains to spread your ashes near our old summer cabin  where you and Grant played and dodged half-wild cattle and waded in the Ria Jemez… where you grew up. Not sure how close, because after all these years, neither of us can remember exactly how to get there. But at least you’ll rest among God’s splendor.

God bless and goodbye, my son.

There’s nothing more to say, except I weep for you, Clai.