A Deeper Look at The Cutie-Pie Murders 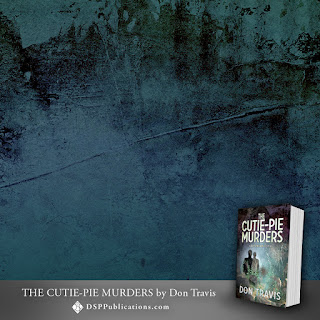 Can you tell I’m moderately excited at the upcoming release of my 7th  B. J. Vinson mystery book? You probably can, because I want to take another look at it this week. Remember guys and gals, it comes out next month. You can preorder it now, if you wish.

For this week’s look at the novel, I’ve chosen a scene from Chapter 8. By using old-fashioned shoe leather, BJ and Paul have located the place where BJ’s client’s son was murdered, a new apartment complex on Central east of the University New Mexico. They go to interview the apartment manager, a young UNM student they’ve discovered is the nephew of one of the owners of the four story building. The Barkley Pierson mentioned is the murdered youth’s lover. The others…. Well, you’ll just have to buy the book to find out.

Quinton James looked no more like an apartment manager and no less like a college boy than the last time I saw him. He shook hands, first with me and then with Paul. We took seats opposite his desk in a nice office. I scanned the beige-and-burgundy walls. Commercial reproductions of paintings. Nothing personal. Quint probably didn’t spend much time here.

I tried to view him as I imagined the cutie-pie killer would see him. Early twenties, slender but with definition, cute… but not cutie-pie. No ring, no photo of girlfriend or wife and kids evident. He pinged on my gaydar. The blip grew stronger when he smiled at Paul.

I directed his attention back to me. “Quint, what can you tell us about the former tenants in 4201?”

“There’s only been one,” he said without referring to any records. “Fellow by the name of Burton Neville. He was one of Park House’s first tenants.”

“What was his occupation?”

“Engineer of some kind at Sandia Labs.”

“When did he leave?”

He fingered the keyboard of his computer a moment before answering. “Tuesday, September 13, of last year.”

“About six months ago,” Paul said.

“Right. Broke his lease, paid the penalty, and moved out.”

Quint repeated what Willow and Wally had told us about a new job in California, but it wasn’t wasted effort. It was corroboration. After Quint ran down, I questioned him about some of the other tenants of the building, but he needed to refer to his records to answer those queries, confirming—at least for me—that he took more interest in tenants who might have been gay.

“Have you heard from Neville since he left?”

Quint shook his head. “No. Although I should have. He has some money coming back on his deposit and was going to call with a forwarding address when he was settled.”

“Has anyone called for a reference, like another apartment complex in California or a Realtor?”

“Nobody. I’m still holding a check for him.”

“What can you tell us about some of the roommates Neville entertained while he was here?”

Quint averted his eyes. “No roommates. He was the only one on the lease.”

A silence built until he buckled. “You must mean his guests. He had a few overnights.”

“Some of them stayed for quite some time, I understand.”

“You can have guests for up to two weeks.”

I opened the folio I’d brought and spread five photos on the desk in front of him, the killer’s four recent victims and the copycat, Pat Aragon. “Were any of these his guests?”

I’d provided snaps of the men while they were alive and attractive. Quint took his time studying them. So far as I could tell, he devoted the same amount of interest and attention to each before looking up and shaking his head.

“I don’t recall ever seeing any of them.”

I tapped Zapata’s photo. “This is the man who died in 4201. Sure you’ve never seen him before? With Neville or in the lobby or on the street?”

He shook his head again, his eyes back on the photos.

“None of them were Neville’s guests?” Paul asked again.

“Ever seen them with Willow or Wally?”

His flush was different this time, signaling anger, but he swallowed it. “Nope. Like I said, I’ve never seen any of these men. Anywhere, anytime, with anybody.”

“Do you know if a young man named Jules spent any time in Neville’s apartment?” I asked.

“No. But like I told you, I never saw any of Mr. Neville’s guests.”

Paul looked quizzical. “Then how do you know there were any?”

His mouth firmed. He was having trouble holding on to his calm. “Just talk. I heard people mention he had guests.”

Paul pushed the issue. “People. Willow and Wally, I imagine.”

Quint’s complexion turned a deeper scarlet. “Among others. Look, I’ve told you all I know. I’ve got work to do, okay?”

“One more thing before we go,” I said, handing over Barkley Pierson’s photo. “How about this man? Have you seen him in the building?”

As Quint studied the image his face crumbled into a frown. “Yeah. I’ve seen this guy.”

Wow! Have they discovered something? Could Matt Zapata’s fellow student and lover he his killer?

a link to pre-order The Cutie-Pie Murders: