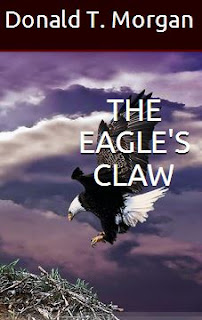 Sorry I’m overindulging in reposts and guest posts, but I’m having a little trouble coping with the death of my older son on January 22 of this year from sepsis. He died in a Texarkana, Texas hospital, and all I could do was tell him goodbye as a nurse held a phone to his ear. She said he was nonresponsive, but I like to believe he heard me.

At any rate, Don Morgan came to my rescue. Here’s a repost of Donald T. Morgan’s The Eagle’s Claw which appeared on July 15, 2015. I hope you like it. Personally, I think it’s great.

Sleep brought a restless dream. Rather, it was the stitching together of a memory by the boy’s subconscious from scraps collected and then forgotten over the years. There was a man in the dream, a tall Indah with brown hair and sad, gray eyes. A small, tawny woman with long, black hair and a beautiful smile was in it, as well. The izdan, well past school age, yearned to be able to read and write. The man, who taught at the Indian school, helped her learn. They were together often. They talked and laughed and grew toward one another.

They left the reservation and were married in the white man’s way. The woman often returned to her mother’s wickiup, but the schoolteacher never came. This was good because a man gazing upon his mother-in-law risked blindness. The young wife blossomed with health and happiness and child. Strength and pride replaced the longing in the man’s eyes.

One day, more Indah brought a rodeo to the reservation. The Tinneh loved a rodeo. It was great fun to watch the gaunt, pale men flop around on bucking horses. Some of the People rode, too. The crowd cheered whenever a cowboy rolled in the dust, no matter he was white or tribesman.

Then a hush fell over the stands. A magnificent roan pranced into the arena. A devil horse with fire-eyes and a black mane writhing like a nest of serpents. Its great hooves struck sparks from the earth.

No one could ride him, hooted the rodeo hands. No one ever had. No one ever would. They offered the bribe of money to any who succeeded. The Apache men stirred restlessly, but advised by diyi—the shamans among them—they refused the challenge even though the prize was hefty.

One man stepped forward. The white man with gray eyes. A teacher didn’t make much money, and he had a family on the way. He would claim the reward.

Death stalked the arena. Evil corrupted the air. The cowboys’ flesh turned green from it. The roan danced in savage glee. The smell of horse sweat and manure and hot dogs and dust hung heavy over the crowd. Invisible owls screeched. Whippoorwills cried, and coyotes cackled.

From the uneasy safety of his dream, the boy watched the man mount the haughty horse. The chute gate flew open. The roan shot out, bucking and whirling in a frenzy. The Indah rode him! He rode the wicked beast.

Enraged by the humiliation, the roan flung himself against the fence. The man was hurt. His fingers loosened. The animal twisted savagely, and the rider fell. The demon horse wheeled.

The woman with the beautiful smile ran into the arena, waving her arms to turn the frothy beast away. The horse charged on, driven insane by talons of monster owls buried in his withers.

The man was dead. The dreamer thought the woman was, too, but she moved. Her body strained in birth even as she died.

And he knew he had seen himself born.

After foraging what seemed half the reservation, Román came up with only six empties: three strawberry, two Grapette, and a Coke with a chip in it. If only someone would pay for the beer bottles littering the ground, he’d be full of food and candy all the time. Booze wasn’t allowed on the reservation, but that didn’t stop the bootleggers. He picked up a long-necked beer bottle and put an eye to the amber mouth. Pretty. He shoved his tongue into the opening and sucked noisily. It was as dry as Barranca Seca in June. He tossed the bottle aside.

The store in White Pine wasn’t open yet, so he played in the mud puddle beneath a faucet for a quarter of an hour before it occurred to him to wash his face and hands. When the place finally opened, he swapped the empties for a full bottle of strawberry. Like he figured, the man refused to pay for the nicked Coke bottle.

He collected his scrawny pony and rode deep into Dead Scout Canyon where the mare could graze while he nursed his drink. It was no longer cold, but he didn’t mind. Warm soda pop made him burp, and he liked to burp. The bubbly water filled an empty belly better than anything. And red strawberry was the best of all. A man would never be hungry if he could buy four bottles a day.

For no reason other than his thoughts were so bent, he belched loudly, once in each cardinal direction, beginning in the east as all things begin and proceeding as the hands of a white man’s clock move. The ritual complete, he drained the bottle and dropped it on a rock.

The noise flushed a woolly spider from beneath the flat stone. Román nudged the creature with his toe. It scooted sideways on eight hairy legs and then froze. Cane-Woman said that if you killed a spider, its relatives would try to kill you. And his grandmother knew about such things. He hesitated, his foot suspended above the tiny animal. Abruptly, he dropped his heel.

“The white man at the Agency did it. The one with fuzzy hair that’s falling out on top,” he lied to the dead spider and all its kin. For emphasis, he nodded in the direction of the Indian Affairs Office in the settlement. There. That should fool the spiders. They weren’t very smart.

When he began moving again, he sensed he was not alone in the canyon. The hair on the back of his neck and the faint clink of stone from the deep shadows told him so. In that moment, he felt a kinship with ancestors who lived when danger covered the earth like a blanket. He decided to stay…even though the image of a huge Grandfather Spider bent on revenge crawled across his mind.

After tying the mare to a piñon, he headed for an outcrop where he could hide. Maybe the presence was other than natural. For years, he’d listened to tales of the Mana, the Great-Power-Flooding-the-Universe, and of the ga’an, the Mountain Spirits of his grandmother’s winter stories. Everybody said Cane-Woman knew Eagle, and that he gave her great power, although Román wasn’t exactly sure how that worked. But things might not be the same anymore. Was this world the same as when the Old Way prevailed? He frowned as he recognized the words of Miss Marshall, his last year’s teacher. Did his mind belong to the Indah woman now?

The mare whinnied and danced at the end of her reins. Whatever shared the canyon was near. His eyes raked the tufa above him. He saw nothing that didn’t belong. Ashamed of cowering behind rocks, he rose and poked his head over the boulder. Below him, he saw his “presence.” No supernatural shared the canyon with him. It was only Clarence Wolf sneaking up on his pony. He didn’t like Clarence very much. A year older and almost twice Román’s size, Clare-Ass wasn’t just a dumbo. He was a bully, to boot.

Feeling cheated his interloper was merely human—and an inferior one, at that—he scooped up a handful of stones and ran down the hill raining missiles upon his enemy. The bigger youngster retreated before the barrage to a more sheltered place. They settled down to throwing rocks at one another with only sporadic accuracy until the morning failed and his stomach began growling again. The sport gone from the half-serious game, he reclaimed the mare and wandered off, leaving his enemy to hurl obscenities at his back.

Abandoning the high canyon to his foe, Román ranged down from the Capuchas onto the edge of the desert. The noise in his gut grew stronger. Chewing a wad of sap from a wounded piñon provided a little relief. He eyed a colony of prairie dogs, but they were such wary little creatures he didn’t even unwind the slingshot tied around his waist.

He rode the mare down the steep side of Split Nose Gulch and came up out of the gully hungrier than ever. He reined in and listened. Had he heard something? No, it was just his head playing tricks on him. His head must be hungry, too.

Then from far away, so faint the wind must have whispered in his ear, he heard a voice. He scouted and found nothing. Perhaps the ga’an toyed with him. Or was it the One-Great-God-Who-Was-Three they talked about at the settlement church? Weird. Three was such a strange number. He preferred four. Four was good and natural. Four was the ritual number of his people.

There it was again. Closer now. A cry for help. He skirted a clump of juniper and cut the trail of a horse. Curiosity set him to following the tracks. The hoof prints made straight for Blind Man’s Arroyo, an enormous ditch snaking down the foothills that carried the spring runoff to the distant river. He dismounted, stepped to the brink, and peered over the edge.

You can only get the book through Amazon Kindle, but I believe it’s a tome worth reading. I say “tome” because it is longer than the usual novel. Thanks, Don, for letting me post the piece again.