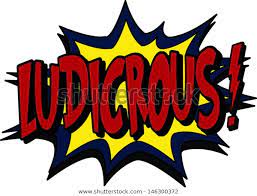 Thanks to Don Morgan for the guest post of his novel The Eagle’s Claw. I hope my readers appreciated the glimpse he gave us.

Perhaps I’m back in the saddle since I was able to create a brand-new piece of flash fiction for this week. Hope you enjoy it.

Ludicrous P. Jones. How’s that for a name? Well, it’s my cross to bear. As soon as I’m emancipated, I’ll change it legally, but I just turned eighteen, so I’ve got three more years to carry the load.

My parents deny it, but I think they were drunk or high on something when it came time to christen their son and heir. They’re kinda retro hippies, and that might be the explanation for the nonsensical name. Mostly, I go by Lud or Luddy—as in “Lood” or “Loody.” That wasn’t so bad when I was a little kid, in fact, Luddy was sort of cute. But once I hit adolescence it just wasn’t manly enough. Lud wasn’t so bad, except it’s too close to “lewd,” which is what I saw in the expressions on all adults who heard it for the first time. I tried to assign myself a nickname, but somehow Rod or Bart or Brick just didn’t stick.

I thought about using my middle name, except it’s just an initial. My driver’s license actually reads Ludicrous P. (only) Jones. So if I use P as a name, people—especially the guys—hesitate between the initial and the last name so that it sorta comes out as an order: “Pee, Jones.”

And last year, I asked my track coach something, and he unthinkingly responded, “Don’t be ludicrous, Jones.” For the rest of the term, that became the stock answer when someone asked a dumbass question. “Don’t be Ludicrous Jones. “Embarrassing.

When first asked about the source of the name, I joked that when my parents first took a gander at their naked newborn, they were shocked at the size of the equipment he carried. And, I claimed, since that hadn’t changed as time went by, the name was still appropriate. Of course, the guys in gym class knew that wasn’t true, but the story hung on and became a school legend. I’d gotten used to surreptitious glances “down there,” even got over being embarrassed by them.

My teachers handled things in their own way. In shop and gym, I was “Jones.” Most of the rest of the teachers either called me “You there,” or “What do you say, Mr. Jones?’ or sometimes Lud or Luddy. One resorted to calling me by my initials, but LP, which brought a rose blush to her cheeks when someone wisecracked “Long Playing.”  Apparently, she equated that with carnal stamina and thereafter adopted the gym teacher’s moniker for me of “Jones”

At any rate, I blamed my name for everything that came later.

The first thing that happened was Bessie Sue Quigley talked me out of my pants to satisfy her curiosity. While she expressed a bit of disappointment, she later said she’d confirm the LP appellation if I wanted her to. I insisted we had to try it a few more times before she could be sure. After two months of Bessie’s auditions, we both moved on to other things.

The next thing that happened was a new guy transferred in and apparently heard the original thesis about my name. Luis—that was his moniker—made no bones about studying my crotch. Once when I caught him at it, he met my gaze and arched an eyebrow. Because I didn’t know how to handle that, I just nodded and rushed on to my next class.

That same afternoon as I closed my locker and prepared to go home, Luis suddenly appeared at my elbow.

“When and where?” he asked.

“When and where what?”

He seemed taken aback. “You nodded, so I assumed you accepted my invitation.”

“What invitation? I was beginning to sound like an idiot. In this matter, I probably was.

“I let my eyebrow ask a question?”

“Are you really that naïve?”

“I know what they say my name means, if that’s what you’re saying.”

“So what’s your question?” I asked.

“I wanna see for myself.”

Luis laughed, and I noticed how handsome he was. I’d never considered it before, but as he stood chuckling over my reaction, I fixed on that. A guy’s looks had never mattered before but, somehow, now it did. What was going on?

“Well, I gotta go to the bathroom before I head out.”

Luis shook his head, sending curly, black locks flying. “Nah. Too public. I gotta get a good look before I render judgment.”

He shrugged. “Simple. I wanna see for myself if what they say about you’s for real.”

Flummoxed, I blurted the first thing that came to mind. “Under the bleachers at the football field.”

“Gotta stow my books. Meet you there in five minutes.”

I felt like a fish caught on a hook. “Sure. Okay.”

And that’s how Luis talked me out of my pants.

Can you use your imagination to complete the story? Be interesting to see how you think it came out. Drop me a line.

My mantra: Keep on reading and keep on writing. You have something to say… so say it!

Email ThisBlogThis!Share to TwitterShare to FacebookShare to Pinterest
Labels: Hetero-Homo, Talking yourself into a corner, Teenage Naivete, What's in a Name?