Living Next Door to Adonis, Part 1 of 2 Parts 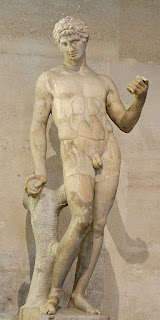 I no longer understand this world. Anytime I've checked statistics the last two weeks, there were three times as many readers from Hong Kong, than anywhere else. And the second contender was Russia, followed by Germany and Ukraine. The US was 5th. Go figure.

LIVING NEXT DOOR TO ADONIS

For a a few months, I lived next door to Adonis… and let me tell you that ain’t easy.

I noticed him the first day I moved into my one-bedroom, third-story apartment in a UNM off-campus dorm. I stowed my things more or less neatly and then walked to the big living room window to take in the view. The view turned out to be the window of the dorm next door. Well, it was a little more than that. It was a good view into the room directly opposite. That’s when I had my first look at Adonis. His wide-open drapes gave me a clear, unobstructed view. I had no idea what his name was, but to me he was Adonis period! Wow! A shock of thick dark hair tumbling over his forehead. Big eyes I was willing to bet were chocolate brown, Cupid’s bow lips that pursed fetchingly as he read the book in his hand.

My eyes moved down. He was sitting at his desk dressed only in denim cutoffs, revealing a deep chest and flat stomach with something akin to a six-pack.

As I stared, he suddenly got up and walked out of sight, giving me a good look at the rest of him. The name Adonis stuck! If his place was a mirror image of mine, he’d just gone into his kitchen, or maybe his bathroom. The mental image that brought was a tingle to my nethers.

Then he reappeared again and caught me ogling. I panicked until he lifted a hand and gave me a wave… plus a devastating smile. My knees went weak, but my arm responded with a wave of its own.

Without even thinking twice, I rearranged my study desk right beneath that window so all I had to do was look up from whatever text I was reading and gaze straight into his apartment.  I was to learn he kept those drapes open all the time, day and night. The first night he had a couple of other dudes and three gals over for a mini-party. I say that because they did some studying together before getting down to popping beer cans. Later in the evening some heavy smooching heated me up and made me turn off the lights so they couldn’t see there was a seventh member of their little soiree.

My morning routine became getting up, rushing through a shave and shower so I could go out and check if Adonis was stirring. Usually he was. A week later, he added a new dimension to our routine.

He walked over to his desk still drying off from his shower. I took it all in with my chin flapping. Double wow! The middle section was as impressive as the rest of him.

Like always, he glanced up and caught me gawking. He gave me his usual smile and hearty wave. I think my arm answered back, but I’m not sure. The rest of me was taking it all in. Then he turned around and strolled out of sight. Believe me the back was as intriguing as the front.

After that, Tuesdays and Thursdays became the days I hated most because I had early classes and missed the morning parade of bare flesh. After a month of this, I lifted my mobile phone and pointed to it, hoping he’d write out a number and press it against the glass pane. He made like he was reaching for a piece of paper, hesitated, and then shook his head before walking out of sight to go get dressed.

The next morning when he picked up his books from the desk, I grabbed mine and scooted downstairs without even waiting for the elevator. Our dorms have four entrances, all of them locked. The residents had to use an electronic pass to gain entrance. I bet it all on the front entrance, but after five minutes, Adonis hadn’t appeared, and it dawned on me he probably had a car in the underground parking lot. That explained why I hadn’t seen him on the campus shuttle bus.

I asked all over the place about who he was with no results until I smartened up and checked out last year’s annual. Took me an hour, but I found him. Thomas A. Astroea. Damn! He was Greek. That middle initial must stand for Adonis. Had to! He was a senior majoring in Electronics, and came from Florida. Other than a photo that put all others to shame, there wasn’t much exciting about his write up. No club memberships, no fraternities, no nothing.

The same evening that I discovered his name, he added some spice to the peep show. I was working on my English Lit when I glanced up to see him walk into view bare-assed again. He usually took his showers in the morning, but he must be going out on a date or something, because he was still drying off when he stood squarely in front of the window and patted water from every inch of his magnificent body. I damn near left a nose print on the glass pane.

When I recovered my senses, I caught his eye and pantomimed going down the stairs and going up another flight. He grimaced and shook his head. Then he started drying off his male member, which proceeded to grow and grow and grow.

What’s going on here? Adonis—the Greek mortal god was supposed to be something of a snob, but a tease? The local Adonis is about to drive our nameless observer batty. Wonder what will happen next week?