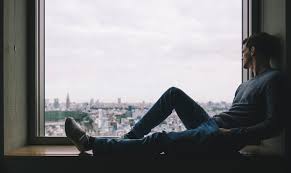 If anyone noticed the change in the numbering above, it’s because the web site told me of all the posts I’d not counted. So I brought it up to date.

Last week Noah Bainbridge, a dedicated loner, was flabbergasted to discover he’d fallen in love with John Llewellyn, a handsome jock he’d been tutoring in Algebra. JL, as he was known by his peers, had been slowly socializing the shy kid, so perhaps his infatuation was inevitable. But what does Noah do now? Let’s find out.

THE KID WHO WASN’T THERE

I figured out what was happening, my first instinct was to quit tutoring him. He was far enough along in Algebra, so he’d probably pass the class without any more help. But somehow, I couldn’t get the words past my lips, so I kept on working at Algebra with him. But my problem grew. I found myself watching his basket more and more. I got distracted by the way his buns moved when he walked, the muscles in his legs flexing, biceps rolling when he moved his arms. How alive I felt when we were alone together. How I had to hide the way I reacted to him. Sitting side by side at his little writing desk was the worst. Sometimes we brushed shoulders when he reached over to put a finger on an equation or to indicate a place in the text. Part of me would react every time, and I figured he noticed once or twice, but he never said a word.

At school, I didn’t feel so invisible because JL would say “Hi,” or give me a friendly punch on the arm, and the other kids started talking to me, as well. I felt like a regular guy…, except for how I felt about him.

One day, after we finished our lesson and collected our sodas, he made for the garage to dig out his baseball and some gloves so we could give that game a shot. When he turned his back and bent over a trunk, something—I don’t know what, a thrill maybe—shot through me and ended up in my groin. I had to swallow hard a couple of times or I would have drooled. After rummaging around a minute he flipped a baseball over his shoulder, and I scrambled to catch it.

When I turned back, he was standing facing me with a couple of gloves in his hand. “Not bad, especially when you weren’t expecting it. We’ll make a jock out of you yet, Noah.”

Embarrassed by my condition, I clasped my hands in front of me. Had he noticed?

“Tell me something, guy.” He paused. “How come I never see you with a girl? Don’t you like girls?”

“Man, there’s nothing like cuddling up with a chick. You ever done it.”

I felt my cheeks flame. “N-no.” Damn, the stutter was back.

“Didn’t think so. You want me to fix you up with a date?”

“How about the other?”

He shrugged his broad shoulders. “You know, with a guy.”

My whole face was burning now. I shook my head so hard I about fell over.”

“How about that. Eighteen years old and still a virgin.”

I nearly drowned in mortification. I needed to get out of there, but my feet wouldn’t move. Not one step.

A grin crawled over JL’s lips. “You wanna try it?”

My mouth opened, but nothing came out. Not even a stutter.

He groped his fly and shook it. “It’s feeling a little frisky. Like it wants out. That okay?”

I swallowed and licked my lips. “I-I don’t care.”

He hooked his thumbs over the waistband of his sweats and tugged. He wasn’t wearing jockeys, so everything spilled out. Wow! There sure was a bunch of everything. And it started to grow.

His smile widened, making him so handsome I could hardly stand it. “Come on over here.”

Those same feet that betrayed me before now scooted over so I was standing right in front of him. He moved his hands away.

“What about your folks?”

He dropped his hands on my shoulders. “They’re gone for a while. Go on, touch me.”

Wow! It was even better than I dreamed. He throbbed and grew bigger when I took him in my hand. I started getting damp down there. I moved my fist back and forth.

He closed his eye. His face took on a dreamy look. “Feels good. Better than I thought.”

“Don’t get nervous. Get serious.”

He pressed on my shoulders and my weak knees dumped me on the concrete with those private parts right in front of me. When he pulled me forward, I didn’t resist. I just opened my mouth and let him take over.

I was getting with the program in a big way when a loud voice scared the crap out of me. JL pushed me away, and I went over on my butt to spot Mr. Llewellyn standing in the door looking like he was ready to kill.

“What the hell’s going on here?” he roared.

Stuffing himself back in his pants, JL glanced at me before he turned to his father. “N-nothing. I-I thought you went with mom.”

“John, you get in the house and go to your room. Stay there until I say different. You ought to know better than to let some little queer get to you.” Red-faced, he turned on me. “And you, you get out of my house and don’t ever come back. I’ve a good mind to call your father. Now get out!”

Mortification almost rendered me helpless, but when he took a step forward, I scrambled to my feet, jerked open the big garage door, and fled down the street. Out of sight of the Llewellyn house, I grew lead footed. Each step was a struggle. Oh God! What would my dad say? What would he do? And my mom, she’d know about it too. Why couldn’t I just die!

I lived in dread and fear and terror for the next three days, but Mr. Llewellyn never called my father. Still, I imagined my parents knew everything about everything. I felt as small as an insect every time I went to school because I figured everyone there knew about it. If JL didn’t blab it, they could probably figure it out just by looking at me. Surely, “school queer” was burned right across my brow.

What hurt most was JL wouldn’t talk to me. I desperately wanted to know what happened after I left the garage that day, but any time I got near, he bolted. And then the kids who’d started chatting with me dropped off, one by one. It wasn’t long before I recaptured that old feeling. Like I was the kid who wasn’t there.”

As I indicated last week, this story is loosely based on what happened to a kid I’ll call Noah here whom I knew a long time ago. He saw fit to confide in me, but by the time we spoke, the incident was known all around the school. His family moved away shortly after that, but I believe it was because his father was transferred. A fortunate transfer that was. I’ve often wondered if Barry recovered from the trauma of that experience to face who he was and learn to hold his head up and be proud. If any of you feel the need to share similar experiences, feel free.