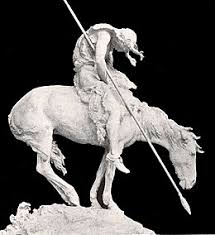 The site had close to 10,000 hits this past month, including a great number last week, so apparently my readers liked Mark Wildyr’s opening to his unpublished novel, Wastelakapi… Beloved. Hong Kong readers stayed with us, and for a short period Russia and the Ukraine were in second and third place, consigning the US to fourth. However, stateside readers eventually overcame the other two and fell into second place. Nonetheless, readers from Hong Kong outnumbered us about 8 to one. Interesting.

In light of all this, Mark has agreed to do another guest post and give us Chapter 2 of the novel. If any publishers out there… foreign or domestic… happen to read and are interested, Mark is ready to deal. I understand the book is completed and ready to go.

In Mark’s Prologue and Chapter 1 last week, We met John Strobaw, whose Indian names are War Eagle, Night Sky Hair, and Medicine Hair, who has only recently returned to his farm from a five-year exile to the Pine Ridge Reservation, in deep—almost mindless—mourning for his life partner, Matthew Brandt, AKA Shambling Bear, who was killed in the Wounded Knee massacre. He and the young man who helped him bring his beloved home were confronted by a posse led by Sheriff Charles Landreth, an Indian hater, who asks John and Winter Bird a strange question. “Did they know the war was over? What did that mean?

Let’s see what we learn in Chapter 2

Ever since the visit by Landreth and his men last Thursday, Winter Bird had kept a close watch on the wagon trail running south to Yanube City. So it wasn’t surprising he was the first to spot four riders approaching at a walk on Sunday morning. One wore the hated blue uniform of the U.S. Cavalry, but draped over the familiar form of my brother-in-law, Captain Gideon Haleworthy, the garb was a sight easier to endure.

My sister Rachel Ann, Ides, and Gabriel accompanied him. Their presence surprised me. The last word I’d had by carrier pigeon from Teacher’s Mead led me to believe she and the children had been living at the home place ever since the Ghost Dance craze frightened the whites so badly last year. No longer comfortable living at Fort Yanube, she had fled home to the Mead. Her tribal blood was too apparent for some of the other officers’ wives.

I mounted the small hill behind the cabin and waved my hat in welcome. A few minutes later, the horses clattered over the bridge and into the yard. Gideon dismounted and handed down his wife from her saddle. Ides, a lanky youngster, who had turned six during the last moon, dismounted like a miniature man and rushed over to catch his little brother as he jumped from his buckskin’s back. Gabe was coming up on five this next month.

My older nephew was actually named William after grandfathers on either side of the family, but no one had called him anything but Ides since I’d hung that tag on him. I borrowed it from the English Bard who had proclaimed William’s birth date–the fifteenth–as the Ides of March.

After Gideon’s handshake, I opened my arms and clasped Rachel Ann’s slender frame against me. She was the first family I’d seen since returning from Pine Ridge, and it was impossible to sort out my scrabbling emotions at the moment. When she broke into sobs, I was hard-pressed not to plunge deeper into melancholy.

“Oh, John, I’m so sorry about Matthew. We all loved him so much.”

In truth, he had been our brother as well as my mate. Our spiritual grandfather, Otter, had brought Little Bear–as Matthew was known then–from this very farm to the Mead when he was Ides’ age. The militia running rampant over the landscape during the Americans’ Civil War had pointlessly killed Matthew’s widowed mother and his older brother. My parents raised the boy just as they had reared Alexander and Rachel Ann and Hanna and me, as if he were their own blood. He had been half Yanube, our band, and half Brulé of the Teton Sioux fire.

I managed to squeeze words through a tight throat. “He died well.”

Gideon had met Winter Bird when my friend lay injured in our cabin years back, so I introduced Rachel Ann and the boys. Then I expressed the belief that Rachel Ann was living at the Mead.

She planted fists on her hips and managed to look like our Ina, our mother, even though her raven hair was nothing akin to Ma’s Scandinavian blonde. “We kept expecting you at the Mead, but you never showed up. Ma was fit to be tied. She convinced herself you needed mothering and was determined to pick up and move here. The only way we could dissuade her was for me to come live on the farm.”

“It would be a convenience to us all, John,” Gideon said. “Rachel Ann isn’t ready to return to living on the post as yet, so having my wife and family seven miles distant is far superior to half-a-hundred.”

“And I’m perfectly capable of mothering my big brother. If you’ll have us, that is.”

I smiled. “You can have the stone cabin up by the irrigation pump. You and the boys will be comfortable there. And Gideon’s welcome whenever he can manage a visit.”

“I thought Dex and Libby Appleton were living in the cabin,” Rachel Ann said.

Libby was the only surviving child of Andre Tiller, my neighbor a mile to the west, who had homesteaded his farm not long after Otter and Major James Morrow built this one. During my six-year absence, Andre had tilled my land and paid my taxes in exchange for the reap.

Dexter was the son of the widowed Englishwoman Jane Appleton, who had worked with my mother at the Mead for as long as I could recall. Ma had successfully plotted Dex’s and Libby’s wedding while I was away at Pine Ridge.

“The Appletons bought the old Stubblefield place about five miles up Turtle Crick shortly after I returned,” I said.

“Good. Then I won’t be turning anybody out. By the way, I have a money belt in my pack. Pa sent some gold and silver and a little copper from what you and Matthew stored there.”

Gideon had only two day’s leave from his military duties to fetch his family and settle them on Turtle Crick Farm, so he helped move Rachel Ann’s packs into the little house before coming back for a talk. She remained inside to arrange the new home to her liking.

Since returning from the reservation, I’d lived in almost total isolation and was thirsty for news. My neighbor, Andre, did my trading in town for the few items Bird and I needed, but he brought back only tidbits of local information.

Ides leaned against his father’s leg after we claimed chairs on the porch. Gabe sat on the steps drawing shapes in the dirt with a stick. Ten minutes into the conversation, I began to understand how drastically things had changed during the years I’d been absent.

The Mead had long been a way station for the stagecoach. Now I learned the line had been driven out of business by a railroad spur running between Fort Ramson and Yanube City. The locomotive travelled the hundred-fifty miles in something over four hours; the stagecoach the stagecoach had taken the better part of two days to cover the same distance. Of course, the horse-drawn conveyance didn’t create prairie fires as the train’s wood-burning firebox occasionally did. The locomotive’s cow catcher had swept up half a dozen bovines and two mules, according to Gideon.

Pa–more likely Ma–had made up for the loss of income from the defunct coach company by setting up an open-sided shelter near the railroad tracks. The train’s engineers had taken to halting for free coffee and cool water. The passengers paid for their drinks and little parcels of food Ma and Jane Appleton sold them. Gideon told me people in the shallow valley along the Yanube River had begun to gather at the spot to catch rides on the locomotive. They’d even started calling it Mead Station.

To take further advantage of the iron horse’s appearance in the Yanube Valley, Pa and Crow Johnson, the Absaroka who worked the Mead’s smithy, traveled south to the Little Island Mountains to cut wood for the fireboxes. Ma’s brothers, my uncles Jacob and Christian Jacobsen, hauled river water for the boilers to the siding in a wagon-mounted metal tank Crow had fashioned.

Gideon let me know both Ma and Pa had taken Matthew’s death hard, each in a different way. I understood what he meant. Pa, a full-blood son of Cut Hand, the last chieftain of our tiospaye, our band, had a firmer understanding of the Warrior Road. Ma’s Danish roots were far enough removed from her Viking ancestors that she considered such a life needlessly reckless.

It was only when my brother-in-law told of the murder of an army lieutenant that I finally understood the purpose of the sheriff’s visit four days ago. The intent of the strange question he’d put to Bird and me also became clear, sending a quiver of anxiety down my back.

Sounds like an interesting historical novel to me. If you like it, email Dreamspinnerpress.com and ask them to consider publication. They published his first novel, Cut Hand, but not his second, third, fourth, or fifth in the series. Mark likes contact with his readers, and can be reached at markwildyr@aol.com. His blog is at markwidlry.com.

Once again, thanks, Mark.

New posts every Thursday morning at 6:00 a.m. US Mountain time.