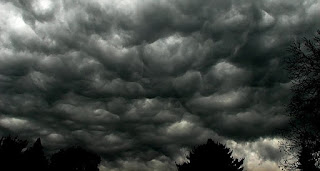 I ran into my bud Mark Wildyr the other day, and we somehow ended up discussing our webs sites. We both post on the same day (and time), at 6:00 a.m. on Thursdays, although while I post each week, he plays lazy and posts only on the first and third Thursdays. But the point of this is that he confessed to reposting this Thursday, as had I. He also indicated the story he chose to repost was darker than usual.

Low and behold, I’m reposting this week as well, and I think you’ll agree this one is also dark. Is it a case of “great minds run….” Or is it that we’re two goof balls out of the same package?

It came in a cloud a year ago this past January, although I could not tell if it was a billow of vapor or a clouding of my mind. Whatever the manner of arrival, It remained to bedevil me. I cast back into my long-lost youth to discern the origins but found nothing. My parents, uncomplicated farm folk, had demonstrated no awareness. Nor did my sister, now a respected professor of Medieval French literature at a major university.

Seeking to understand brought its own form of headache. I shivered as if cold, which I was not. Fever touched my brow, but I did not suffer the ague. My hands trembled without aid of tremens. The me I knew, became the increasingly stranger me I did not want to know as the mists—now darkish gray—descended, unbidden, unwanted. I fought through a darkness tantalizingly sprinkled with shards of light to what I knew lay at the center. The vision It brought.

The haze grew thinner, the light stronger as I struggled through the masking mist toward a scene as yet unmanifested. I loathed these revealings, all too often harbingers of disaster.

As the roiling strands of vapor parted, my head pounded as I saw my neighbor Ben sprawled awkwardly across the floor in his own kitchen, his body and clothing smeared like a scarlet-rich palette had exploded. I drew a breath. This was not an oily hue but mortal blood. One sightless blue eye was broken, as if cleft by the meat cleaver lying on the floor, handle and blade smudged with drying gore. A pungent, unpleasant odor invaded my reverie.

Horrified, I shrank back into the protecting folds of dirty fog, but they pressed me forward to kneel beside my friend and fruitlessly seek signs of life. Yielding to my fondness for the young man, I cradled his lifeless body to my breast and muttered incantations of sorrow. He gave offense by ignoring me, although the rational me recognized it as no fault of his own.

I eased his inert frame—alive and vital and handsome only hours ago—back onto the linoleum and gained my feet to take out my phone and dial 9-1-1, providing my name and address to the dispassionate voice on the other end of the line—a phrase no longer appropriate as there was no “line” in this age of unfathomable electronics.

Done here, I gathered my now welcome cloud around me and returned to my corporeal self back across the street.

Seconds later—or perhaps minutes or hours later—the mournful alarm of sirens shredded the neighborhood calm as I huddled in my easy chair, an unread a book in my hands. Reading was not appropriate while my young friend lay butchered nearby. But perhaps my horrible dream would not prove reality, as was sometimes the case.

Exhausted, I did not peek through the curtains as my neighbors most certainly did, seeking titillation from the swarm of police in this staid and sedate neighborhood. Ah, but my mind wanders. Be still and wait.

I have no idea how long before the knock, but I started like a mouse belled by a cat when it came. My legs managed to hold my suddenly heavy bulk as I shuffled to the door for affirmation of my fears.

“Mr. Fisk?” a blunt faced man standing on my porch asked. I nodded mutely as his piercing eyes raked me. “Good morning, sir. I’m Detective Charles Grant.” He flashed a shield in my face.

“Come in, Detective,” I invited, backing away from the door.

He seemed cautious, but accepted my invitation, although he paused until I turned away and returned to my favorite recliner. Another man followed him into the room. The second man was younger and much more attractive, putting me in mind of Ben. “Did… did you find him?” I asked.

“Exactly. Hacked with a meat cleaver. Probably his own.”

“What was your relationship with him?”

“Is that all?” the second, unnamed man asked, his mellow baritone catching my ear.

I smiled at him. “He moved in about two years ago, and we became neighbors. Shout hello across the street. Meet in the middle of the pavement to share our day.”

“Nothing more than that?” Detective Grant’s voice was an intrusion. I preferred dealing with the other man.

“What else could there be?”

“Before we get into that, how did you know he was murdered?”

“Him who? The murderer?”

“Let me get this straight. You saw him on the floor of his kitchen?”

“Not exactly. You see, I have these visions.”

Grant’s eyebrows reached for the moon. “You saw a vision of him being killed?”

I shook my head, eyes locked onto those thick, dark eyebrows. Would they dance like that again? “Yes, I occasionally see things.”

“Before they happen?” the younger policeman asked.

“Sadly, no. All my reveries come after the event.”

“Did you go over to your neighbor’s house after your… vision?”

The police detective’s sudden glare raised the hair on my arms. “Then why are you covered in blood? Most likely his blood.”

My chin dropped in astonishment as I held my hands before me. Red-streaked. Bloody! “I-I don’t know.”

“Are those bloody fingerprints on the meat cleaver gonna turn out to be yours?”

His voice dropped into a snarl. “You left them when you hacked your neighbor to death. Get up and turn around.”

I expected the younger policeman, the nicer one, to speak up, but he didn’t.

“You’re under arrest for the murder of Benjamin Pitman. You have the right—”

“I checked the record. He lodged a complaint about you. You propositioned him, but when he refused, you wouldn’t let it go. He got a restraining order against you.”

“For all the good that did,” the formerly nice officer said.

As Detective Grant fixed the manacles around my wrists, the cloud lifted, vanishing as quickly as it arrived. And I saw things as they were.

It had a name now.