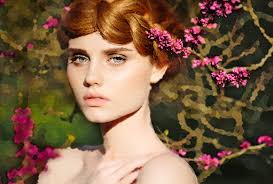 Not much reaction to The Upper Floor, but a goodly number of hits.

Let’s see how this next one does. Still an enigmatic story, but totally different. Let me know how you’re liking Miss Emmalee.

By the way, I apologize for stretching this out over five weeks. But the story kept growing and growing as I wrote. I tried it in four parts, but some of the segments ran far too long. So try to stick with me.

The first moment I cast eyes on the painting, I knew I had to have it. Yet, for the life of me, I couldn’t explain why the portrait of Emmalee Vanderport called to me so strongly. While serving in the army, I’d once stood at the Louvre admiring Leonardo DaVinci’s Mona Lisa without suffering such an emotional tug. But like Cornel Wilde in the movie Laura, I was struck dumb by pigments of varicolored oils dabbed on canvas.

After haggling over the price with the estate sale manager, I gritted my teeth and robbed my savings of three thousand dollars to acquire it. Carrying the three by four painting to the car, I stowed it lovingly in the back of my GMC Terrain, giving it one last glance before closing the hatch and crawling behind the steering wheel. All the way home, I chastised myself, asking why, why, why?

But when I hung it over the mantlepiece in the stead of the seascape that had graced that space, I was again made rapt, and the questions fell away… except for what to do with the seascape, really, a very good piece itself. I stowed the usurped painting out of sight, and sat in my recliner to view the new acquisition.

Immediately, the enchantment returned. The portrait, obviously done in the bower at the rear of the Vanderport mansion, showed a slightly pouty young, swan-necked woman with brown hair in a formal coiffure, her green eyes peering from beneath slightly drawn brows. Emmalee Vanderport looked comfortable over my fireplace. And I was comfortable having her there.

That evening, as I sat rereading James Lee Burke’s Creole Belle, Dave Robicheau’s preoccupation with a Cajun girl named Tee Jolie Melton made me vaguely uncomfortable with my obsession over the Vanderport portrait. I dropped the book in my lap and lifted my eyes to meet the emerald orbs of the painting and puzzle once again over the slightly knitted brows. What was bothering that lovely woman as she sat patiently—or perhaps impatiently—for the artist reproducing her features on canvas like a geomancer rendering beauty from ugly oil pots. Was I smitten?

I experienced no lust upon viewing the painting, and I usually equated the two. No, I wasn’t in love with the image of Miss Emmalee—as the whole town knew her—I was puzzled by it. And a puzzle calls for solving.

The next morning, I set about that task by revisiting the Vanderport mansion on the north side of town to find the sale winding down. All the prime pieces were gone, and the few prospective buyers wandering about were simply looking for some small token they could claim once belonged to the town’s most notable family. In some of the tellings, the item would become a gift bestowed in gratitude for some imaginary favor, in others, simply tokens of friendship. I doubted many would admit they picked it up for a song at an estate sale. We humans tend toward hubris and self-delusions, I fear.

A rather jaundiced view for a man only twenty-eight, but it was dictated by my own history. And perhaps that’s why I wanted to know the reason for Miss Emmalee’s shaded look. I’d been on my own since I was seventeen when in a fit of unwarranted honesty with my father, I admitted my attraction to one of my male schoolmates. Dad, a frustrated jock and insincere evangelist, tossed me out without thinking about it twice and thwarted all Mom’s efforts to bring me back into the fold. I still recall one odd exchange from that fateful day.

“You can’t throw the boy out, Henry. It violates the contract,” my mother shouted as it became clear my father was serious about banishing me from home.

“Contract be damned,’ he yelled back at her. “I’ll not have a pansy… a queer contaminating our family.”

As traumatized as I was, I managed to ask my mother what she meant about a contract. I recall her answer, her last words to me on that day. “Contract? Oh, honey, all I meant was that there’s an unwritten contract between parents and child. The parents nurture and protect. The child learns to behave and grow.”

Unable to lash out in any meaningful way at my father, I took it out on her. “So I guess I violated the contract first by turning out queer!” I used the hateful word deliberately. I’ll forever regret my cruelty to the one person fighting for me.

The first few years were difficult. After my secret Adonis yielded to my passionate pursuit, the event left something to be desired, and to make matters worse, he promptly wrote me off as a conquest and moved on. Out of desperation, I sold myself to some men on the street for a meal or a roof over my head for the night, but that always left me feeling unclean.

Rescue came quickly when one of my teachers learned I was homeless and put me up in a one-room apartment—if that’s the proper name for it—over his garage and steered me to an after-school job at a local car parts store. That saw me through graduation without further degrading myself, and after that, I joined the Army, spending some time serving in Germany. I worked like hell earning college credits whenever possible and took my bachelor’s degree within a few months of leaving the service.

And then my old man did me a favor. He died. Finally free to do so, Mom reached out to me, and I moved back into my old room. Beyond that, she used some of Dad’s insurance money to stake me in my own business. I started buying old cars—classics when I could find them—and restoring the vehicles before selling them for a profit. Life was good again. Then Mom died, leaving me the rest of the money and the house. Since then, my shop had prospered enough to move into a proper business site.

But I digress. The estate manager, who turned out to be a Vanderport cousin, took the time to fill me in on some of Miss Emmalee’s background. She’d been born in this house some eighty-odd years ago, graduated from a women’s college back east, and returned to live out her life as an unmarried spinster, living off the family’s wealth and occupying herself by volunteering both time and money to the community.

Aha! Was the fact she was unmarried the source of the sadness I discerned in those painted eyes? Perhaps. As the cousin could contribute nothing more, I thanked her for visiting with me and returned to working on a Porsche I’d found as a near ruin and was on the verge of rendering into a classic. When I sold this one, it alone would make the nut for the next month.

Sounds like Miss Emmalee’s portrait has grabbed hold of our unnamed protagonist in a serious way. Why? Because it hints at secrets, and there’s nothing—short of sex—that pushes our buttons than learning other people’s secrets. Wonder what happens next? We’ll find out next week.

Email ThisBlogThis!Share to TwitterShare to FacebookShare to Pinterest
Labels: Coming out as gay, Fascination with a portrait, Homeless teen, Miss Emmalee