It’s That Time of Year Again – My Blue Period 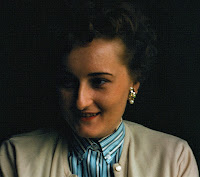 Once again, I ask your indulgence while I spend some time and effort at personal healing. Yes, it’s my blue period again, but as you’ll see below, there’s more to it this year. I’ve kept it shot so as not to intrude upon your time too much. Thanks.

The first photo is of my wife, Betty, taken years ago. Although it doesn't look like it in the picture, she had coppery red hair at the time.

This one is of my older son, Clai. Like his father, you need to look closely to determine his hair color.

The unusual spelling of his Christian name, Clai, is derived from his mother's maiden name: Claiborne.

I haven’t heard from anyone speculating on Widget Jackson’s story. Would like to have your take on it.

Those who have read my blog for any length of time know I take time out once a year to do some personal remembrances and grieving. I once called February through April my “blue period.” Alas, now it stretches for nearly half a year. Let me explain.

My wife Betty died at Kindred Hospital in Albuquerque, New Mexico on February 12, 2009 of respiratory failure, renal failure, and sepsis.

I met my future wife when the US Army transferred the 47th Infantry Regiment of the 9th Division from Ulm, West Germany (as it was designated at the time) to Fort Carson, Colorado. Four of us enlisted men bummed around together and had a marvelous time in Germany. I was the Second Battalion clerk, Carl was Headquarters Company Clerk, and I don’t recall the MOS of Ernie and Kurtz.

Once we landed in Colorado Springs, we discovered Carl had a sister in Denver with another single woman as a roommate. Lo and behold, there were two single women living right across the hall in the same apartment house. Long story short… Carl, Ernie, and I ended up marrying one of the gals, and Kurtz got away. I married Carl’s sister.

After leaving the army, I found employment in Denver. Our first child Clai was born there. Eventually, I was transferred to Albuquerque, New Mexico. I fell in love with the place immediately, but Betty, a natural redhead, had allergies… one of which was to dust. It took awhile for her. Our second child Grant was born here.

So why did I call February to April my blue quarter? Betty was born March 13, Died in February, and our wedding anniversary was April 8… all dates that called her to mind.

When did my Blue Quarter become a half-year ordeal? My older son, Clai, died in St. Michael’s Hospital in Texarkana, Texas of sepsis on January 22, 2021; his birthday is May 14. Ergo, my sensitive dates now stretch over 5 of the 12 months of the year.

Clai was a sickly child, as well as a prickly child. He grew out of the sickly stage for a while and turned into a very good auto mechanic. He was bright but not always practical. He suffered from what he called ADD (which I called Multiple Personality Disorder) and did not make friends easily since you had to figure out who he was at any given time. Clai was more of a loner than his old man. Clai never married. He became further disabled because of a severe back problem and moved to Texarkana to be near my mother—his grandmother –whom he loved dearly. When she died, he remained in Texarkana. An alcoholic, he received his 23-year sobriety pin before developing a series of worsening ailments, including heart trouble. A failing heart was the reason behind the sepia that eventually took him.

I miss them both.

PS: My younger son suffered a heart attack last November. Fortunately, he was in the waiting room at Presbyterian Hospital with his wife when it struck, so the wheeled him into emergency where he received an angioplasty and a stint. A little rocky there at first, but he seems to be recovering.

Thanks again for putting up with this for another year. Otherwise, I survived the holiday season and the end of last year in reasonable shape. Hope the same is true for all of you.