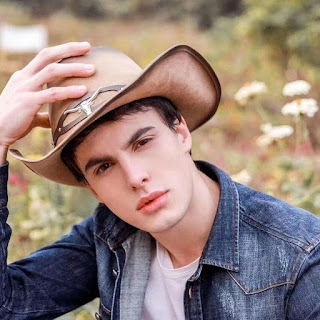 Last week we met Tod and Baud. And there seemed to be electricity in the air, at least from Tod. Let’s get right to it and see what develops, shall we?

I didn’t see Baud Youngfellow again for a few days, but his big Bentley was often parked at the boardinghouse as I passed on the way to school, so he was still in town. Then my heart sank when it wasn’t there one morning. He’d left. My Oklahoma Adonis was gone. Nothing but a minor blip on my personal radar.

Except he wasn’t. That same morning I overheard some girls talking in the hallway, causing my spirits to perk up.

“Have you heard?” one of them asked, giving her brown curls a flip. “That dreamboat with the big car rented a house.”

“So he’s staying?” another asked.

“I hope so,” the third girl said. “Can you imagine what it would be like to get with him? His name shouldn’t be Baud… it ought to be Bawdy.”

Titters from them, a flash of jealousy from me. I mentally beat my head against the lockers. What did you expect? If he sent your pheromones scrambling, what did you think it would do to the fairer sex? I stopped looking for competitors among my own gender and expanded it to the whole of womanhood.

That very weekend, I ran into Baud as he came out of the hardware store. My knees went weak when he addressed me by name.

“One.” Nobody’d ever asked me that in my whole life.

“Okay, Tod with one d, how’d you like a job? Part time till school’s out. Then we’ll consider making it full time.”

Flustered, and frankly addle-pated at the moment, I responded in the worst way possible. “I usually work at the Town Market summers.”

“Oh. Okay, maybe you can recommend—”

“I’m doing some renovations on the Hawkins place. I’ve rented it with an option.”

Wow! That sounded permanent. “Well, I did some carpentry work for my uncle when he built a couple of sheds.”

“So you know which end of a hammer to bang with,” he said with a grin. “That’s good, but this is a little more delicate. Delicate, meaning scroll work, which is pretty touchy. I’m wainscotting the den, which will be my office, with some pretty expensive wood after I fashion it the way I want.”

My mouth got away with me again. “Woodcarving supports a Bentley automobile?”

He grinned, and as usual, my knees acted up. “It’s a Flying Spur, not the most expensive model. But seriously, my art isn’t what bought the Bentley. You know I come from Tulsa, right?”

“Well, back in the day, my family was in oil. That was when oil was big. So you see, I’m a trust fund baby. And I didn’t buy the Bentley. I ran around in a Volkswagen until my grandmother got fed up with that image and gave me my dead grandfather’s car.”

My head answered for me again, nodding enthusiastically. “You bet. I used to do some wood carving, but that was back when I was a kid.” I think I blushed. He probably still considered me a kid.

“Atta boy. It’s proper that the first man I met in La Rosa is the guy who hooks up with me.”

Knees again. And my stomach joined them. Man, he’d called me a man for the second time. And hooked up? I’d hook up with this guy any way he wanted. My smile about ripped my lips apart. At the very least, my cheeks hurt.

We made arrangements for me to report after school on Monday for a couple of hours’ work. Only two more weeks remained before the term ended, and I looked forward to that. I’d work so hard he’d be sure to make it a permanent thing for the summer. After that, I floated home.

It didn’t occur to me until I was pedaling up to his driveway that a bicycle would instantly paint me with the “kid” label, but there wasn’t anything I could do about it. My dad let me use the family car occasionally, but not every day. Most of the guys rode bikes to get around. La Rosa was that kind of town. Not big. And not affluent enough for everyone to afford a car. Maybe the cowboy hat I’d dug out of the back of my closet would be enough to change my image.

Baud stepped outside and watched me lean my bike against the garage wall. My shame evaporated with his first words.

“You know, I’ve been thinking about using a bike to get around town. Costs a fortune to simply fire up the Bentley.” He patted his flat belly. “Besides pedaling helps keep the weight off.”

Man o’ man! Working around this guy was gonna be something else. Any time he touched any part of himself, I wanted to go touch it too.

Gee, if he were only up to the same thing I was. Actually, I was impressed. The wainscotting he’d already installed was a rich walnut with fancy work along the top and the bottom of rectangle of wood… a panel he called it. Every second panel had sort of a gargoyle-head right in the middle. A relief panel, he explained.

I would have said this was professionally done until I spotted the partially completed panel at the worktable he’d set up right in the middle of the room. Come to think of it, it was professional quality. This guy was good. How in the hell was I going to help him?

He showed me. Before long, I was plying a special carving tool, a gouge, I think he called it, to some inexpensive throw-away wood to learn its application. He kept me at that for the entire three hours I worked. He stayed at my side in the beginning, but after I got the general hang of the thing, he went about his business, checking on me occasionally to correct something or show me some mistake I’d made. It wasn’t that hard to learn, once I got over being in a hurry. My biggest problem was keeping my eyes on the work instead of watching his trim butt or the muscles play in his back or roll in his arms. Did he work without a shirt in the summer, or did he stick with the thin T-shirt he wore now? Oh, wow. This was going to be exquisite torture.

So our local high schooler is in love. What about the worldly Oklahoman who set him afire? So far, no clues… except that Tod thought Baud’s gaze lingered overly long below the belt the first time they met. Oh, yes. And Baud sought him out to hire him for a part-time job. Wonder what happens next. By the way, how do you like the picture of Tod in his tan hat?