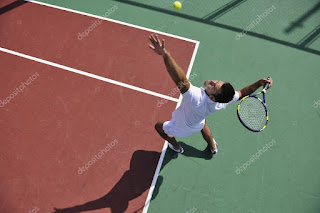 Last week, we left Dolph Hardy and his idol Damon Dutton in a car heading for a party when Damon suggests that after tonight, they forego sexual activity until after next week’s big tennis tournament—you know, to keep from draining their strength. So let’s see what happens next.

Suzie—the local who belonged to this house—opened the door and greeted us with the news her folks were out of town. Which meant the booze would flow. I got pleasantly loose but not drunk, and was enjoying myself talking to a couple of friends when Damon tapped me on the shoulder.

“Self-imposed. You can catch a ride with somebody else if you want, but I’m leaving.”

Saying hasty goodbyes to the people in the vicinity, we took our leave. No one spoke for a few minutes.

I frowned at him. “I thought it was a pretty good party.”

“Yeah, but neither of us scored.”

He banged the steering wheel with the palm of his left hand. “Well, the night’s not over yet.” He took a left and headed west.

“Where you going?” I asked.

“Nothing down here but the city park.”

I glued my lips together and did some fast thinking. Had he asked two babes to meet us there? That would explain the abrupt exit from the party. Would Phillipa be one of them?

He entered the park and headed for the most heavily forested area. After a couple of quick turns, he pulled into a secluded, well shielded area and parked.

Silence reigned until I asked, “Where are they?”

A shiver ran down my back. “What?”

“Girls aren’t the only way to get it, you know.”

“Oh, come on, Dolph. I’ve seen the way you check me out in the shower. Losa times. I’ve done some checking of my own. Looks interesting. So let’s find out.”

My mouth was dry, but I managed to mutter, “I’ve never done anything like this.”

“You telling me you’ve never jerked off with a buddy?”

“Couple of times. Getting it’s getting it, you know. And having a buddy’s better’n doing it all by yourself.”

I tried not to look but couldn’t help it when he slid his trousers and shorts down over his strong thighs. He grasped himself and sighed.

Not feeling as reluctant as I thought I should, my clothes were down around my ankles in moments. I was already ballooning. Fast.

I’d only pumped a couple of times before he spoke.

He reached over and took me in hand. After an initial jump in surprise, I had to admit, his hand wrapped around me felt good. So I grabbed onto him.

He moved his head to the back of my head and pulled me over atop him. Our lips were only inches apart.

He gave a low, growling laugh. “Stop looking like a deer caught in the headlight. Relax. Close your eyes, and imagine it’s Pillipa.”

I did, and when our lips met, I’ll swear the earth moved. I felt his kiss race down my torso to my privates, and right on down to my toes.

I exhaled, which sounded sort of like a whine.

“Feel anything?” A slight frown painted his face, or that’s the way it appeared in the gloom of the thicket.

Incapable of speech, I nodded my head.

He shut me up with a second kiss that felt just as good as the first. After that, I was putty in his hands. He moved my head wherever he wanted, to his hard pecs to wash his nipples, down to the navel, which my tongue invaded, and then lower. I couldn’t believe it when I took him. But again, he manipulated my head however he wanted. I stopped resisting and did as he wished.

After a while, his moans grew louder, and I came up to meet his eyes. “Sorry, I’ve never done this before so I—”

“He pushed me down on him again. “You’re doing great, Dolphie. Just great. Oh, Oooh!”

Then he exploded! I didn’t know what to do, but he held me down on him, so I did what I had to. A long minute passed after he finally finished gushing before he removed his hand. In the grips of something I didn’t really understand, I sat up and grabbed my thing, pumping away as if there was no tomorrow.

Before long, he brushed my hand away, and grasped me in his own. As he worked, he leaned across the seat and gave me a long, blissful kiss. I couldn’t honestly say if it was his hand or his lips that did the trick, but I blasted like I’d never blasted before.

I hadn’t even finished my orgasm before a sharp rap on the window startled us. Quick as a whip, Damon sat up and yanked his britches into place. Still lethargic, I watched—entranced—as a flashlight played over my bare chest and belly, and then my wilting manhood.

Damon didn’t waste time in obeying. He backed out of the sheltered nook, scratching the rear end of the Impala on some bushes behind us. Then he goosed the accelerator and roared down the road.

I restored my clothing in silence, except for the roar of the engine.

“Man, that was close,” Damon said.

“Closer’n you think,” I said quietly. “I recognized the cop when you pulled forward. It was Dolby.”

Damon gasped. “The cop who sometimes works the college?”

I nodded my head.

“Shit! He’s got a big mouth. He’ll tell everyone.”

Silence. Then. “You were great,” Damon said. “I knew you would be.”

The cop had, indeed, been Dolby. And he might not have blabbed to the whole college, but he told someone, and pretty soon word spread all over the campus. I managed to hold my head up and plow through, until I heard another side of the story. Damon’s side.

I’d gotten him drunk at the party. I’d made the moves on him, taken advantage of his friendship. Pressed myself on him. Seduced him while drunk.

No one mentioned that he was driving. Dolby didn’t come forward with the fact when he turned that flashlight into the car, it had been Damon on me, not the other way around. Nonetheless, I kept my mouth shut, so his version prevailed. But I didn’t quit school. I stayed and pressed on and held my head up high.

Just before the term ended, Marlow Caffery caught me in the SUB, the Student Union Building. He put his hand on a chair at the table where I sat alone trying to study. “May I?” he asked.

I shrugged. “Free country.” Just what I needed, the guy everyone claimed was the school queer sitting alone at a table with me.

He leaned forward over the table. “Dolph, I’ve heard the stories. Everybody has, I guess. But I wanted you to know something. Whenever Damon got frustrated… you know, sexually, he’d sneak over to see me for relief. In the three years he’s been on campus, probably a dozen times or so.”

I looked over my textbook to peer into his eyes. Green they were. “Really?”

“Yeah. And he’s looked me up once since all the hullabaloo.”

“Since… we were caught?”

He nodded. “And you know what I said? I told him to piss off. Surprised the hell out of him. He bluffed and threatened, but he left when I shut the door in his face. Just thought you oughta know. He nodded and left.

And so my hero crashed. Damon Dutton, fallen idol, A profane eidolon.

How do you feel about it? Should Damon be given a second chance, or has he irredeemably proved himself a false friend? Let me know our thoughts.