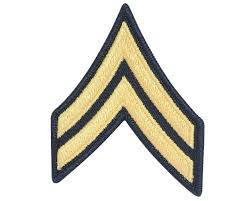 How did you like the first part of Corporal Jozef Zuzluski’s story? Lippy bastard, isn’t he?

Saturday, Lieutenant Saunders got up before Joe, hit the shower, threw a casual invitation to breakfast, and headed out the door when Joe declined. Joe didn’t think he’d drunk that much Friday night at Morry’s, but his gut didn’t feel accepting of bacon and eggs or much of anything else. Nonetheless, after the door closed on the lieutenant, Joe crawled out of bed and let the shower revive him a little. He was shaving with a bath towel snugged around his waist when Saunders appeared in the open bathroom door.

Joe wiped off the last of his shaving cream. “Didn’t think so but—” He shrugged his shoulders, aware of the other man’s eyes sweeping his naked torso. “What’s on the agenda today, sir?”

“Doing what the Army does best. Hurry up and wait.”

Joe examined his superior critically. The yellow polo shirt the lieutenant wore hugged a good torso. Navy blue slacks outlined slim hips and a nice crotch. He almost became dizzy as he realized he didn’t know what he wanted to happen next. He’d shot his mouth off to the lieutenant the other day without knowing why. Tired of the work details, maybe. Or was it something deeper.”

“Penny for your thoughts, corporal.”

Saunder’s lips curled into a tight smile. “Up to you. You can drop that towel. Or you can get dressed and go to the Crocker Art Museum with me. Or… there’s always Morry’s.”

“And if I decide to drop the towel?”

“That oughta be worth it all by itself.”

Joe hesitated a minute before dislodging the towel and letting it drop to the floor.

Saunders nodded. “Impressive. Not many men are uniformly handsome. You know, from top to bottom, but you seem to be one of the them.”

Feeling like a bull on display in the auction ring, Joe said the only thing he could think of. “Thank you, sir.” So help him, he felt a tingling in his guts, and his manhood began to stir.

Saunder’s features went stern. “I’d appreciate it, corporal, if you didn’t get a hard-on around me.”

The coup-de-gras delivered, the lieutenant turned and walked out of the hotel room. Joe stood before the mirror, his face flushed, his guts crawling with shame.

Joe spent a good part of the day in Morry’s, but his obvious mood kept most of the patrons at bay. A few guys and gals he’d chatted with the night before kept their distance. Understandable. He tried to clean up his mood, but the damage was done. Midafternoon, he returned to the hotel room and flopped down on his bed. Maybe he was more looped than he thought because a little rocket ship buzzed around in his head. Crap, why had the lieutenant humiliated him like that?

That’s an easy one, Zazulski. To get even. Bring him down. Revenge. That got him to thinking. Why had he done almost the same thing to Saunders last month? That one wasn’t so easy. Maybe it just came down to putting the cocky shavetail in his place. Nah, that didn’t compute. Joe thought long and hard, and just before he dropped off to sleep, he still hadn’t come up with the solution, except that the good-looking officer got under his skin. Why?

The key in the lock brought him awake. He opened his eyes in time to see Saunders enter the room. The lieutenant paused, looking surprised.

“Thought you’d be at Morry’s.”

Saunders held up his cell phone. “Got a phone call while I was at the Crocker. The committee finished their work early, and I picked up the papers already.” He laid a thick envelope on the desk before the only window in the place.

Joe sat up on the side of the bed. “We can head back to base?”

“Can. But I thought we’d stay over tonight and leave sometime tomorrow.”

“Look, Joe. I’m sorry about that stunt this morning. I just….”

“You just wanted some payback.”

The officer grinned. “Yeah. Guess I’m human after all.” Saunders sat on the edge of his bed facing Joe. “Okay, that explains my actions. But why did you say the same thing to me a couple of weeks ago?”

Joe shrugged. “Lipping off, I guess.”

Saunders shook his head. “Uh-uh. You don’t get off that easy. Come on, give.”

“None of that. There was a reason. Now give.”

“Jealous,” the lieutenant finished for him.

Joe blinked. “Yeah. I guess that was it. Sorry if—”

“Joe, I’m going into the bath to take a leak. When I come out, I want you in the same condition as when I left you this morning.

With that, Saunders got up and headed for the bathroom. As soon as the door closed behind him, Joe jumped up.

He almost tore buttons from his favorite shirt getting out of it.

Personally, I think the two of them were merely jockeying for position. And I think maybe the lieutenant got the better of Joe. What do you think happened when Saunders came out of the bathroom? Can you play that scene in your head? Who was top? Who was bottom? Tell me what you think.