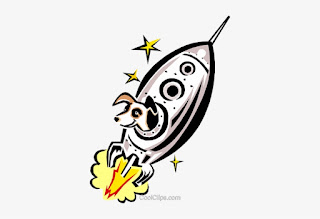 Last week, we left ten-year-old Tommy in the dark on a stormy night when his parents can’t get back to the farm because of a washout. Is he dreaming, or are there aliens in his father’s potato patch? Let’s find out.

I didn’t hear them, but Brute did. He hopped off the couch and ran to the front door barking his head off. And from outside the door, came, “Yip, yip, yip!” He scuttled back to the couch and wiggled his way underneath it.

Something brushed against the back door.

I heard others at the windows. The creatures had surrounded the house. I snatched up the tactical flashlight, ran to the closest window, and pressed the lens against the pane before switching the light to strobe. By the flickering light, I saw a monster outside, but he wasn’t flinching, and his head wasn’t deflating. He wasn’t doing anything but peering in the window, his eyes covered by something dark. Sunglasses! Well, not like any I’d ever seen, but they must have done the same thing. When he swung an arm at me, I dropped the curtain and scrambled backward on my behind. I heard it scrape the glass, but the window didn’t break.

I scrambled up and ran to my room. Without knowing why, I put on my Cut Scout uniform. Maybe my brains were scrambled from terror, but I felt more prepared. Until Brute started going crazy in the living room, that is. Then I heard a different kind of yelp.

Racing back to the front room with my weapon—it wasn’t just a flashlight anymore—I found one of the creatures holding a terrified Brute by the nape of his neck. I’d have thought my buddy was dead but for his eyes frantically searching the room for me.

“Leave him alone!” I yelled and rushed forward with the light strobing fiercely. I didn’t get far. Something snatched the flashlight from my hand and lifted me off my feet with what felt like a cable wrapped around my chest. It took a second to realize it was another creature holding me against him. Before I lost reason to terror, I remember thinking the thing wasn’t flesh and blood at all. It was a machine, like in that old movie the War of the Worlds. But it wasn’t metal imprisoning me. Not flesh, either. Not human flesh, anyway. It was something in between.

No matter how much I struggled, I couldn’t get free. Kicking the thing holding me didn’t seem to bother him. He marched out the back door, which they’d opened without kicking it in, and started for the potato field. Others fell in beside him, making me think of army guys marching in step. An occasional whine let me know the one carrying Brute was right behind me.

In the trek across the yard and the field, I forgot to be scared, especially as we neared the big ship sitting partially buried in the mud. Big and black and mysterious, it had a ramp in the side where we seemed to be headed. Lord, were they kidnapping us? I mumbled the first prayer I thought of, which was the one about laying me down to sleep, as fear took possession of me again.

Several of the creatures swarmed around holding what looked like tools, working at another hole in the side. One that seemed like a compartment of some sort. As scared as I was, a little common sense penetrated my brain. Something had happened to their ship. They’d crashed—it seemed more like a crash landing—and were trying to repair things. A thousand-million crickets seemed to be chirping like crazy as they chattered among themselves. A sudden bolt of lightning struck about a mile or so beyond old man Wilson’s farm across the road, and every one of the creatures ducked. The ones without the sunglasses—or whatever—held arms or tentacles to their heads. Then they went about their business again.

Light! They couldn’t stand white light. That’s why all the lights around us were blue.

We entered the ship and went straight to a big hall where one of the creatures sat in a big chair raised up like it was a throne or something. A few other creatures clustered around a nearby table studying something, maybe the operating manual for this big airship. The chirping noises stopped as they all turned to stare at us through huge uncovered eyes as we neared.

The one holding me threw me to the floor before the throne; the other one dropped Brute. As my fearless protector scrambled over to cower between my legs, the creature holding my flashlight bowed before the one on the throne and handed over my weapon. The one in the chair examined it briefly, accidentally turning it on. Everyone cowered before the flashing light, but the creature managed to get it turned off. Suddenly, he leveled a finger or claw or something in between at me and emitted a loud, scratchy sound My knees went weak, almost dumping me on top of Brute.

Another creature, bent and leaning on a stick of some kind, addressed the creature cricketing at me. The king or chief or ship’s captain or whatever he was stopped chirping and looked at me. He extended a long, cable-like arm and raised his chin—if he’d had one. I blurted the only thing I could think of.

I shook my head and managed to keep from stuttering. “Tommy.”

He leaned back and pursed tiny lips. “Tommy.” He folded his long whip-like arm and touched his chest. “Akachetto.” He waved his arm toward the others and said something that sounded like “Mixterns,” so that’s what they became to me.

He chirped some more, and others came bearing what looked to be stretchers. They folded back metallic blankets to expose two of the creatures with withered heads. I caught my breath and exclaimed, “Dead?”

“Dead” he parroted, pointing first to me and then to the forms lying before him. “Tommy. Dead.”

My heart about jumped out of my chest before I figured out he was trying to ask a question. I nodded and said. “Accident. It was an accident!”

“Accident.” He chirped back and forth with the old one before nodding at Brute. One of the creatures snatched him up before I could protest.

“No!” I yelled as they handed my pet to the old one. He pulled out something that looked like a hypodermic, except it had no needle. He pressed it against Brute’s neck, and the thing made a hissing sound. Brute yelped and went limp. One of the others—guards, I guess—handed Brute to me.

The touch of his soft, fur, the half-closed lids on his once-bright eyes released me from my paralysis. “You killed him! You killed my dog!” Tears came flooding, making speech impossible.

At his bidding, the guards shoved me in a far corner of the big hall and stood by as the minutes and hours tolled. I sobbed over my dead friend until exhaustion brought me a troubled peace.

Loud, excited chirping roused me. Mixterns came flooding into the ship, jabbering at one another like crickets gone wild. At last, Akachetto took his place on the throne and one of the creatures bowed before cricketing at him rapid fire. Akachetto nodded and pointed in my direction. The guards came for me while the rest scurried about like they were on a mission. And I guess they were. The problem with the ship was probably fixed. Now we’d soar off into space, and I’d never see Mom or Dad again. I tuned up for a little crying before the two guards prodded me to my feet and herded me through the ship, me still holding my dead friend. Then I saw the ramp. Were they gonna let me go? Before they shoved me through the hatch, the old one with a cane appeared with his syringe in hand.

I jerked away. “You can’t kill him twice!” Leave him alone.” Oh, Lord! Was he gonna use it on me and leave our bodies in the potato field?

The old one ignored me and pressed the thing to Brute’s neck. It hissed again before I managed to tear away and run down the ramp. I didn’t stop until I got to the windbreak, then I turned, expecting to see the creatures coming for me.

But they weren’t. The ramp was folding in upon itself, and the hatch was closing. They were leaving. I felt movement in my arms. I glanced down through the still-dark night and saw Brute give a big yawn. Then he reached up and licked my face.

Joy flooded my whole being. My friend was back. They’d undeaded him.

I glanced up as a loud hum built. The earth shook as the craft pulled itself out of the mud with a big sucking sound. It hovered a moment a few feet off the ground before moving straight up in the air and then simply vanishing.

Putting Brute down, I skipped around to the back door, which still stood open. I examined the door and the frame but didn’t find any damage. How’d they get in?

All of a sudden I was so tired, I almost didn’t make it to the couch. I’d barely stretched out with Brute snuggled against my belly when I passed out.

I woke at the sound of my mom’s voice “Tommy! Tommy! Let us in.”

“He’s barred the door. Smart kid. I’ll go around back,” my dad said.

I still wasn’t completely awake when he came into the room and headed for the front door. “How you doing, sport?” he asked, as he let my mother in.

“Fine,” I mumbled. Then I came awake. The Mixterns. I needed to tell….

But my lips remained sealed. I’d probably dreamed it all. Bad dream. Nightmare. Except… it came out all right.

“Tommy,” my mother exclaimed. “Why are you in your scout uniform? And there’s mud all over your boots. Did you go outside?”

Despite that, I convinced myself last night had been a dream… until my dad looked out the window and exploded.

“What the hell happened to my potato patch?”

I dunno if he was dreaming or not… but something happened in that fallow field.

Email ThisBlogThis!Share to TwitterShare to FacebookShare to Pinterest
Labels: Aliens in the Potato Patch, Bobby and Brute and the Mixterns, Reality or Dream World