The Mountain (Part Two of Four Parts), A Guest Blog 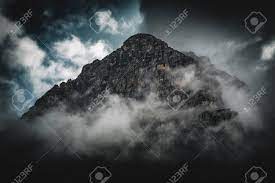 This week, we have the second installment of Mark Wildyr’s story of a magic mountain. I enjoyed last week’s segment when Hargis met the beautiful Gwendolyn on the mountain but foreswore her considerable charms… much to his own puzzlement. Let’s see what happens next.

The pathway ahead became far more difficult. Rocks torn from the slope blocked the way at times. Late afternoon found me panting and sweating at the edge of another beautiful park and mentally kicking my bum for refusing to sample the beautiful girl on the back trail. Mindful of the refreshing bath earlier that day, I knelt at the side of that same mountain stream and washed away the day’s grime before partaking of the cool water. As I started to rise, I froze. Standing on the opposite shore where the stream was at its narrowest, was a slender youth.

I issued a challenge from sheer surprise. “Who is there?”

“A friend,” came a clear, light voice. My words had galvanized the figure to action. Gracefully, the stranger leapt the stream and strode to meet me. “My name is Gwinnyth,” said a gamin mouth set in a gamin’s face. It was another girl…or woman, if you prefer. Younger than the other, but looking strangely the same except she was slimmer and wore her dark hair cropped close to the head in a strangely pleasing manner.

Introducing myself, I admitted to being a traveler on the way to the far coast. Offering me sustenance, she walked up the stream in a strong, boyish gait to a fire merrily burning in a carefully constructed rock pit. A hare simmered in a spit over the flames.

As she carefully offered a meal of charred flesh on a broad green leaf, she set about questioning me. I responded good-naturedly.

“I am Hargis of Rodenbury, a cobbler on my way to the eastern shore to visit boon companions from my past.”

“You go to seek your beloved?” she asked innocently, her small head dainty upon its slender neck.

“Nay,” I protested quickly and then paused at the thought. “Mayhap you have struck upon a truth. There is a fair lady awaiting on that shore.”

“One? You spoke of two?” she said, nibbling at a hare’s leg on her own leaf.

“The other is a youth. Nay, he’s a man by now. I keep remembering him as I saw him last these three summers past.”

She looked up with interest. “He is fair, as well?”

“When last I saw him, he was as beautiful as his sister.”

“Then likely still he is,” she said nonchalantly. Suddenly, she eyed me frankly. “You have traveled far. You will spend the night with me?”

There was no doubt of her meaning. Her dark eyes examined me from pate to boot with the same disconcerting frankness as had Gwyndolyn. Fresh from that sweet temptation, my rod reacted with excitement.

“And where do you bed down for the night?” I asked through a tight voice.

“Why here, of course,” she replied.

She glanced at me with puzzlement. “The mountain is my home.”

“Have you never been off it?”

Again, she looked perplexed. “There is no other place, at least in this world,” the small mouth proclaimed firmly.

“Then from whence do I come?” I asked with a smile.

“The other world,” she responded promptly.

Delighted at the provinciality of this woman-child, I rose with a laugh and proceeded to wash myself at the stream. As she had no blankets of her own, I allowed her to snuggle against me as we settled by the campfire. She made no objection when I lay close behind her, my groin fitted to her rounded buttocks.

Strange, I thought to myself, that I should be so excited by this slight woman when I spurned the voluptuous Gwyndolyn. Nevertheless, I responded to her. As my staff rose, her firm buns wiggled closer against me. I reached around and fastened upon a rounded breast with a rigid nipple. Aye, I’d take this one for all her boyish, coltish ways.

Suddenly, a loud noise at the edge of the glen drew me to my feet ready to meet any danger. A lilting laugh eased my concern.

“Tis only a stag drawn to the fire and bolting when he caught our scent,” she said. Thudding hoof beats through the far brush seemed to confirm her opinion. “Come back to our bed,” the girl pled.

And I did, but my ardor was deflated, the desire gone. I turned my back to her, and resting my head on my arms, I wondered at the fragility of my need. My heart raced, but it was from the interruption, not the wanting.

Her words startled me. “Are you sure?” To my muttered affirmative, she added, “Are you certain?” I made no further reply, but fell asleep.

When I woke the following morning, Gwinnyth was gone. It was as if she had never been there except for the ashes in the fire ring.

What’s going on? Two enchantresses have offered themselves, and he’s rejected both of them. He doesn’t understand it… but we do, don’t we?