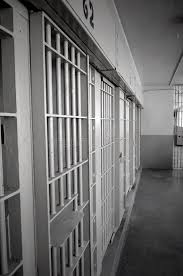 Hope you liked the “Splendid Desolation: story. Today, I want to start a new story with a different theme. Let me know how you like it.

The van entered a gate in the ten-foot chain link fence topped with razor wire and came to a halt at the sally port of the New Mexico State Penitentiary in Santa Fe. Two deputies ushered three men through a series of high-security metal doors into a room where they removed shackles and restraining chains from the prisoners.

Claudio watched a heavy-set man running to fat jaw with one of the deputies who’d delivered them. Fatso seemed to be in charge of the prison side of things. The other two prisoners shifted impatiently while the hacks joked about what a crappy place the pen was. Claudio sat without moving. He was in no hurry. He wasn’t going anywhere for a long time.

Eventually, the deputies left and the dumpy prison guard, backed by two other officers, turned his attention to the prisoners. “Stand up when your name’s called. Inmate Padilly!”

Claudio sat where he was.

“Inmate Padilly!” the guard repeated in a loud voice. Claudio still didn’t move. The man stalked out into the area where the prisoners sat and lifted a photograph, comparing it to Claudio. “How come you didn’t you answer when I called your name, boy?”

“I didn’t hear nobody call my name.”

The prison hack leaned over, his face so close his breath almost made Claudio recoil. “Nobody likes a smart-ass con. And ‘specially nobody likes a smart-ass Injun con. Whenever me or any other official of this penal institution calls out your name or anything even close, you stand up and let out a hoot and a holler. So if I says Inmate Padilly or Inmate Patootie or Inmate Papoose, you jump up and kiss my ass, you hear? Inmate Papoose!”

“Get in there and strip off everything. I want you nekked as the day you was born.” Then the fat guard started in on the other two prisoners, leaving Claudio standing bare-assed on cold concrete. Eventually, the other two stood beside him while the guards circled them, making notes of all tattoos—he had none—and obvious scars.

After that humiliation, they were ordered into the showers where the guards sprayed them with a foul-smelling mist—to get rid of cooties.

“All right, bend over and spread ‘em,” Fatso said. The guards made a joke out of examining body cavities, using a flashlight to make sure there was no contraband up there.

Then the new inmates showered and were fingerprinted, photographed, and assigned a number. Finally, they trooped over to another room for clothing and bedding.

On the way to the cellblock for quarantine, he caught his first glimpse of the place he would call home for the next five years. Noise was the overwhelming impression. It was not especially loud, just a constant rumble. Instinctively, he knew it never died but went on forever: the drone of voices, endless hawking, spitting, grunting, the clang of metal on metal, the ringing thump of wood on metal. Man noises, nothing but man noises.

And then there were the eyes. Eyes that watched him with curiosity, contempt, suspicion, fear, loathing, lust, bemusement, hate. He soon learned examining new meat for profit or threat potential was the highlight of an inmate’s life.

During the thirty endless, boring, nothing days of quarantine, the tiny cell grew smaller and smaller. Stale air. No sunlight. No moonlight. No green trees or desert grasses. He could hardly picture a piñon or imagine a mule deer or a mountain brook.

The last week there, he discovered a secret to sustain him for the rest of his time in the joint: how to focus his hate. Feeding off of it gave him strength and power. He woke one night from a dream about the Martinsons and furiously tossed everything in the cell that wasn’t fastened down. Ignoring the catcalls of other inmates, he worked off the pressure threatening to rip him apart. The cellblock guard never showed his face to check out the noise. Tired at last, Claudio put everything back in its place, lay down, and went to sleep.

He moved to a new block where his cellmate was a young Mexican national named Luis, who spoke very little English. They left one another alone except to borrow cigarettes and soap and safety razors from time to time. He considered the wetback an ideal cellmate. He didn’t know or care what Luis thought about the arrangement.

At the close of his thirtieth day in the joint, Claudio grabbed the kid around the waist as he climbed to the top bunk and hauled him down to sit on Claudio’s lap. The warmth of Luis’ ass on his cock felt good. The kid didn’t say a word when Claudio stripped Luis’ pants off and exposed himself. The kid’s eyes bugged, but he didn’t make a sound. Claudio bent him over the bunk and entered him in one long jab. A few minutes later, he shuddered through his orgasm. Didn’t mean a thing. After a month of nothing, tearing off a piece of Luis was just getting relief. Again, he didn’t know what Luis thought about it and didn’t care.

The woodshop in Prison Industries where Claudio was assigned made a whole series of things like name plates, tables, benches, and desks. Fifty or so men worked in the general area, but only three other inmates were in Claudio’s immediate vicinity. A wall and a couple of strategically placed cabinets gave their alcove a semblance of privacy. On the first day, one of the Industry hacks gave Claudio instructions about what was expected of him and disappeared.

He worked at his own table and paid no attention to the others around him. Occasionally, he would see a guard, but for the most part he was on his own. The third day on the job all of the regular crew disappeared as four men from other work units converged on his area.

“What’s your name?” A gray-haired man of about forty chewed on a dowel of wood like the butt of a long dead cigar.

Claudio considered not answering but gave his name.

“My handle’s Lawless. Ain’t that a pisser, a con named Lawless? I hear you’re in for robbery. This your first beef?”

“‘Cept for some Arizona county time.” Claudio clamped his mouth shut. Too much talking.

“What’d they give you?” The man wouldn’t let go.

“A nickel? Shit, they was hard on you. Musta been some rough stuff involved.”

Claudio went back to work. Pay them no mind. Maybe they’d go away.

“Hell, I already been here almost five.” Lawless leaned on Claudio’s work table. “Five years is a long time, know what I mean? Five years locked up in this joint. You know what, Claudio? That’s your name, right? You Mexican? That’s a Mex name, ain’t it?”

“Yeah, that’s what a buddy of mine in Receiving tells me. Says you’re Indian. Apache, right?” Claudio shrugged. “Whatever you are, you one good-looking son-of-a-bitch. Pretty as any girl I ever seen. But, shit, you know that, don’t you?”

Claudio raised his head and glared at the man, pouring all the ice he had into the look.

“I seen lots of them come and go, but you’re the prettiest one been through here in a long time. Christ, you got the best skin I ever seen on a man or a woman. I went with a gal down in Abilene once that had skin just like yours. Man, she was something! I bet you don’t even shave yet. Nice and smooth all over, ain’t you?”

Claudio’s voice dropped. “No man’s ever touched me, and any that tries is looking to get killed. There ought to be plenty of queers in a place like this to keep you happy. So fuck off!”

It looks as if Claudio has picked up an admirer… an unwelcome one. Let’s see how he handles it next week, okay?