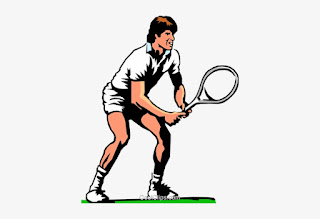 Well, last week, we met two tennis rivals, Pete and Dom. Of course, they’re rivals off the court too. Dom, it appears, has taken Pete’s girl Marisue away from him. Pete, somewhat of a Romeo, doesn’t take this well In part one of the story, they try to settle their differences on the tennis court. It ends in a draw. Then Dom takes Pete by surprise and proposes they ditch their girls and go bar hopping that evening. Pete agrees.

Let’s see what happens next.

The rest of Saturday afternoon was uneventful except for his roommate, Mickey, grousing that Pete should have put away Dominic without much trouble. Mickey knew his way around a tennis court, and pointed out a half dozen times Pete had muffed a shot.

A few minutes before eight, Pete parked his Cougar in front of a sand-colored stucco, a typical 1950s New Mexico house converted into a duplex. He punched a doorbell, and a smiling Dom opened the door and invited him inside. Pete instantly turned envious. The living room was bigger than the dorm room he and Mickey shared. Probably a one-bedroom apartment. Did Dom share the bath with the tenant on the other side, or had the place been renovated? Renovated, probably.

Dom was as neat about his home as he was his person. Well used but clean furniture without a speck of dust in sight. Heck, Mickey’s side of the desk they shared at the dorm hadn’t been dusted in a month.

How about a drink before we go?” Dom asked. “Beer or hard stuff?”

They took seats in the living room after Dom set out coasters on the coffee table.

Halfway through the first drink, Pete realized Dom was an interesting guy. His folks had come up from Mexico and gone into the food business on a dime and a hope. They operated out of the family’s kitchen with his father and Dom and his two brothers going around the neighborhood offering tacos and burritos and tamales to anyone with a buck. Along about Dom’s first year in high school, his father opened a café specializing in Mexican food.

Dom drained the last of his drink. “Have another?”

Dom had worked and gone to school every day of his life from age six. It wasn’t until high school he discovered tennis, and from that time on it had been school, work, and tennis.

Pete couldn’t claim anything so… so rigorous. His dad owned the only auto parts store in their little town, so life had been easy. He’d worked in the store from high school onward, but whenever he wanted time off, his old man worked around it. But it did seem like he spent more time chasing girls than Dom did, so how come Dom ended up with Marisue. Now on his third Bourbon rocks, it didn’t seem so important.

Ten o’clock rolled around before either of them mentioned going to the bar, and by that time it didn’t see worth the trouble.  It was easier pouring amber drinks out of that big bottle than getting up and driving to the bar. Like he said, Dom was an interesting guy.

Damn, was Mickey playing one of his jokes? Light played against his closed lids. He growled at his roommate, but it did no good. Holding a hand up against the glaring light, he fought to get his eyes open. The light wasn’t his loony roommate joking with him, it was the sun coming between the open blinds of a window he didn’t recognize. He blinked. Where in the hell was he? Trying to clear his clogged throat, Pete discovered his mouth was dry, lips stuck together. He worked up some saliva before glancing around. Strange bedroom, strange bed… and he was naked. He sat up with a start.

He shook his head, and slowly last night came into focus. Dom’s place. Drinking before going to the bar. No… never made it to the bar. Good lord, how much had he drunk? He shook his head again and almost toppled over on the mattress. Pete scratched his head and tried to remember. But that was all. Just drinking tumbler after tumbler of bourbon rocks. And then… everything was a blank slate.

The door opened, and Dom Duran walked in and gave him a big smile. “Awake now, hun?”

“Guess so, feel too lousy to be asleep.”

“You can’t hold your liquor, that’s what. Passed out on me, so I put you to bed.”

Pete lifted the sheet and took another look. Yep, bare-assed naked. “How come I don’t have any clothes on?”

Dom paused in hanging up something in the closet to give him a look. “You don’t remember?”

“Like I said, you can’t hold your liquor. Threw up all over yourself. So I got them off you and threw you in bed. Your duds are in the drier now. Had to run them through the washer twice.

Dom grinned and shrugged, neither confirming nor denying. But after a moment, he said, “In case anyone ever asks you, you’re a pleasant drunk. Very accommodating. Didn’t give me any trouble at all. Did everything I asked.” He turned and strode out the bedroom door, tossing a comment over his shoulder. “There’s a robe you can use on the foot of the bed. I laid out a towel and washcloth and an unused toothbrush so you can clean up.” He left the door open behind him.

What the hell had happened? Pete glanced to the other side of the bed. Someone had obviously slept there. What did did everything I asked mean? Oh, crap, had they…? But nothing felt wrong. He crawled out of bed and headed for the bathroom, no longer sure of his assessment. Everything he had felt achy, itchy, sore, or strange. But that could have been the bourbon.

Half an hour later, he came out of the bathroom squeaky clean and feeling a little bit better… not much but a little. He cinched the robe around his waist and glanced through the open door. Dom was standing at the stove, a spatula in hand, minding his own business.

Pete hesitated. How could he face Dom, not knowing what had happened? Should he be pissed out of his mind because Dom might have got to him last night? Yeah. It had been Dom’s idea to meet at his house before going to the bar. And Dom had poured them drinks. And… and they never made it to the bar.

But… but shouldn’t he hurt if Dom… well, did anything? Depended upon what, Pete guessed. Went down on him? That almost brought a laugh. Good luck with that. Drunk as he was, not much chance that got Dom anywhere. A shiver went down his back and the next thought. Dom could have taken him. From behind or in the mouth. Pete smacked his lips. He’d had a gaah taste when he woke, but hat could also be the booze. And he wasn’t sore back there. Would he be sore? Pete shrugged. Hell, he didn’t know. That was beyond his experience level.

Pete watched Dom from beneath lowered lashes as he shoved the eggs, toast, and bacon on his plate around. If he hadn’t been preoccupied with speculating on last night, he wouldn’t have eaten any of it, but a good part of the breakfast went down his gullet.

As soon as his clothes were dry, he dressed and took his leave. As he walked down the short sidewalk toward his car, Dom called from the doorway.

He turned and watched Dom give a wink.

“We’ll have to do this again… real soon.” With that, Dom closed the door.

Pete’s paranoia returned… in spades. What the hell did that mean?

Wow! Did Dom have his way with Pete or not? If the tennis jock did, wouldn’t Pete have remembered it? If he was just drunk… maybe, maybe not. If he was drugged, then probably not. He's just a blank slate... for now.

At any rate, this could this be the beginning of something… either a love affair or a knock-down-drag-out battle.