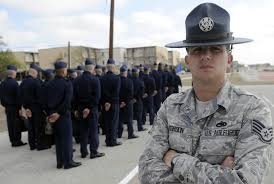 Last week ended as TI Bley called out a detail of five men… including Trainee Justin Corso. Did he have an ulterior motive in selecting the handsome young man? Let’s see.

It took half an hour to dig out everything I had on my list. As the men worked, I found myself watching Corso. He was as graceful as a cat…a feral cat. His biceps bulged as he lifted the cargo. His chest expanded with his efforts. A desert camouflage T-shirt stretched across his muscled torso, and I went dizzy as I mentally whirled back to Egypt when the young tech lay beneath me, his slender form straining to meet my thrusts. I recalled the feel of his lips on me and got angry. How dare this sexy motherfucker remind me of things like that?

My explosion when one of the trainees dropped something probably seemed normal to the detail, but I had to work hard to keep from turning loose on them. Instead, I issued orders without really understanding why…at least consciously.

“All right, take the last of this gear and load it in the truck. We got most of it already. You,” I snarled at Corso. “You stay here and help me find the balance. The rest of you head back, double time. I’ll catch up to you before you get back to the squadron. Get to it!”

Four trainees stumbled out the door with their bundles, dumped them in the truck, and took off down the road, single file. I turned on Corso.

Within five minutes I had the remainder of the gear ready to pack, but I lingered. My unreasonable anger had cooled; the urge to pick at the boy had not.

“What’s with you, Corso?” I demanded, abandoning the TI façade.

“It’s a simple question. What’s with you? Why did you enlist? What are you running from?”

Those strange shimmering eyes fixed on me for a moment. “That’s a personal question, Sarge…uh, sir.”

“Yeah, it is. Now I’ll ask another. Are you gay?” I took in the quick, wounded look and held up a hand. “Don’t answer that. I’ll ask it in another way. One that won’t trap you.”

Risking my career as well as my teeth, I walked straight up to him and placed a palm on his hard chest, feeling the heart skitter beneath his ribs. Uncertainty clouded his face. I didn’t give him a chance to think about it. I pulled him to me, and for the second time in my life I kissed a man…and damned near swooned like some candy-assed queer!

After it was over, neither of us said a word, just stood cheek to cheek until he yielded to the pressure of my hands on his shoulders and went to his knees. He pressed against me and fumbled my fly open. I released my belt and dropped my trousers to my knees. His hand on my sensitive flesh sent a tremor through me. He did nothing more than rub a gentle hand over my belly and thighs and buttocks for a long moment, and then he went to work. I leaned against shelving holding gear while emotions swirled like a kaleidoscope through my addled brain. Anger, fear, lust, gratitude, resentment. Anger because this good-looking stud had brought back memories of Egypt I’d spent years suppressing. Fear that we’d be found out. Lust…Lord, yes…lust. Nobody’d raised such sensations in years, since…Egypt. Gratitude that this dark-headed Adonis was ministering to me, resentment he was drawing me deeper into some fathomless hole while doing so. And then I closed my eyes and surrendered to his touch.

“Shit!” I mumbled opening my eyes to watch the road in front of the hut through the window…and snatch glances at the handsome hunk working on me.

The kid was good. Experienced. I thought that was heaven until he did something with his tongue. Then that was heaven, but I didn’t know nothing! My knees damned near collapsed when he started humming or something. The vibrations almost sent me over the roof!

Heaven finally arrived. Electric currents shot through me—even my nose tingled—as the contractions hit. My orgasm took me back to Egypt, back to every woman I’d ever fucked, every hand job I’d ever had, and left them all in the dust. Contractions wracked my whole body, consumed my mind, wrung me out, and left me spineless, boneless, helpless. Finally, Corso pulled away and looked up at me.

“Fucking beautiful!” I gasped. “Now I have the answer to my question, but in a way neither of us can exploit. The big boys call it MAD.”

He stood in front of me. “Mutually Assured Destruction.”

I hoisted my trousers and straightened my clothing, trying to keep from looking at him. I failed. He was a powerful sexual presence. I should have been ashamed, embarrassed, repulsed. I wasn’t. I wanted him again. As I started to walk away, he took my hand and pressed it against the hard lump of his groin.

I paused a moment. “All right, but I won’t do such a great job on you. Haven’t had that much experience. And I want an answer to my question. Who’re you running from?”

The boy answered as I slipped his uniform trousers down over his tanned thighs. Shit, he was even beautiful south of the belt, and from years of short-arm inspections, I knew that wasn’t always the case. He gasped as I teased grasped him.

“It…it was my history professor,” he stammered. “He understood what I needed before I ever…oh, shit…ever knew myself. Fuck, Sarge, that feels good. I’d forgotten how much. Oh, man, I’d…forgot. Oh!”

As I knelt before him, drawing soft sighs and moan, I felt the strength of his thighs. I explored his flat, ridged belly, and brushed his heavy chest. I might not have been an expert, but this kid was so deprived that it didn’t make any difference. Within minutes, he groaned a warning. Then he exploded like he was never going to stop. Shit, this guy was a walking package of pure sex. Meat and muscles with a fucking, drop-dead gorgeous kisser.

By the time he got through it and I stood in front of him, I’d recovered my sanity. “You understand what this means, don’t you?” I demanded, already halfway back into my TI mode. “I’ve gotta ride you hard. Can’t let anyone think I’m…easy on you,” I said, barely avoiding using the words "sweet."

“This probably earns you some extra detail time. Some of them out in the boondocks where there’s nobody else around.

His jeweled eyes found mine, and a smile played at the corners of his broad mouth. “Sir, thank you, sir!”

I eyed his air force field uniform as he walked to the door of the Quonset. Yes, sir. That fabric sure was a thing of beauty when it hugged the fine figure of Trainee Justin O. Corso.

Now what do you think of that?

My mantra: Keep on reading and keep on writing. You have something to say… so say it!