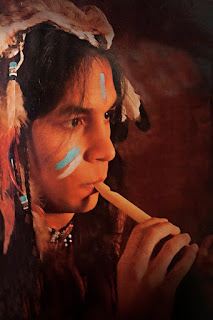 My fellow Okie Mark Wildyr is trying to get a publisher to pick up the other books in his Cut Hand series. He’s asked to do a guest post presenting the opening to the second book in the series, River Otter. I, of course, graciously consented.

When we reach Chapter l, the first player is River Otter, more commonly called Otter, white man’s name Joseph Strobaw, who was the last spouse of the legendary Billy Strobaw, a white man the Indians knew as the Red Win-tay. The second is Dog Fox, whom Billy gave the white-sounding name of Cuthan Strobaw, so that the youth would never forget his true father, Cut Hand. The year is4, and the Civil War is raging, but has not touched this part of the Wyoming Territory… until now.

Stanza from the poem “Echoes of the Flute” by Mark Wildyr

White Stone Hill, Dakota Territory, September 5, 1863
The sun rising over the smoldering village promised a hot day. The sky was clear blue and cloudless, except for the cumulus of black buzzards circling expectantly overhead. Smoke from blazing lodges rode the wind, burning eyes and carrying the acrid smell of gunpowder and the stench of death across the prairie to the coulees and the short, wooded hills where the Dakota warriors had taken refuge. The very air tasted bitter to the tongue. They were tired; their horses, spent. Even the earth beneath their moccasins seemed exhausted.
On the run from the Star Chief Sibley since the battle at Big Mound two moons past, they had stood to fight him again at Dead Buffalo Lake. Now for the span of two suns, they had done battle with another Star Chief called Sully, a relentless warrior who spent his time drawing pictures with pigments soaked in water when he wasn’t killing tribesmen.
Today would bring no respite. The blue coats and their thunder guns were still here, hovering like the feathered bone pickers circling overhead. The white army had inflicted a terrible toll on the Dakota. Warriors were accustomed to staring into the face of death, but how could even the bravest stand against big guns that shredded men and horses with bursts of fire and thunder?
Inkpaduta, whom the Americans called Red Cap, a dour, pox-scarred war chief, had led them through these many days of slaughter, fighting with a ferocity born of a deep, implacable hatred of whites. He had a wily mind, vicious fangs, and terrible claws, but Sully had numbers, firepower, and tenacity.
The shelling began again with the booming of cannon and the ear-splitting eruption of hot shells. The fusillade was not so effective now that they had the protection of the gullies and the hills, but Sully would soon be on the move. Their ranks decimated, the Indians withdrew, abandoning food and provisions and leaving their women, children, and wounded to the mercies of the Americans. All was lost now, but at least some of them would live to do battle another day.

The Strobaw family’s life has been shaped by the people and the events ever since Billy Strobaw came to the territory in 1832, fleeing New York where his family was tainted by their loyalty to the crown during the Revolutionary War. Now, another war is about to change things for them once again.

If you would like to read more of the book, please let DSP Publications know of your interest.

My personal links: (Note the change in the Email address)