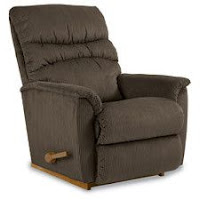 
Perhaps not. I’m a “status quo” sort of guy. Except for a computer, almost everything I own probably qualifies as an antique. Until absolutely forced to replace it, I slept on a bed bought over fifty years ago. Heck, I use handkerchiefs that are thirty years old. Ragged, but old. A couple of tables in the apartment are senior to my sons.


The point I am trying to make is that other than consumables, I do not often buy things. In addition, I am really attached to my favorite chair. But when my legs start going numb after sitting for a period of time, I consider the idea of acquiring another. You must understand that there are two centers to my universe (well, three… but we won’t talk about the refrigerator): my Lazy Boy recliner and my computer desk. I eat meals in that chair. I read there. Nap there. Work puzzles and write short fiction on my laptop… and it’s only fifteen-years-old, hardly an antique.


Nonetheless, when Lazy Boy advertises a sale, I consider this a sign from on high that it is time to act. I visit the store and ask to see their cheapest…er, least expensive chair. In passing, the sales representative points out a recliner he considers their best buy. Naturally, it is fully $100 more than the chea… least expensive. The man invites me to sit in the chair of my choice and try out all sixteen of its positions while he goes to the office and works up a pricing sheet.
The old boy knew what he was doing. After five minutes, I recognize the chair is too small. When I recline, the foreshortened back leaves my head hanging with me staring at the ceiling slightly behind me. My hips don’t fit properly. On and on. So I do what he knew I would… ask him to show me that other chair. By comparison, it is heaven. The cost is at the upper limit of my budget, so I have to bargain. I agree to handle the sales tax if he eliminates the charge for “stain-proofing” the fabric. He agrees but won’t budge on the $80 delivery charge. Okay, so I’ll pick it up at the warehouse and do away with that deal breaker. I know people with trucks and muscles. Shouldn’t be a problem. So we make all the arrangements, and I return home.
Wednesday arrives… the day of the Great Chair Pickup. I’d asked my neighbor (hereinafter known as MN) to help me pick up my new purchase. MN is big, hefty fellow almost as old as I am who has a Nissan van equal to the task. Between the two of us, we should be able get my chair into the apartment and dispose of the old one.
We make the first two steps but then discover that the chair is dragging on the sidewalk. We reposition it, which isn’t as easy as I expected. Even so, we make it to the set of five steps in front of my building where we run into a problem. MN insists we fasten the chair with a bungee cord so it won’t fall off the trolley as we bump our way up the steps. I don’t think thait's necessary because I am at the bottom supporting the chair, but we’d used his truck and mostly his muscle power thus far. Besides, he’s a trained scientist. (True, he’s a geologist, but it has an “i-s-t” at the end, doesn’t it? My government and history degrees only have an “e-n-t” and an “o-r-y between them. And what’s an ent and an ory when compared to an ist?)
As he’s fighting that battle, another neighbor comes by (hereinafter known as My Other Neighbor or MON) and sees our predicament. After taking in the situation, he grabs the trolley, pulls it up the steps, and rolls the chair into the apartment. Then he hoists my favorite recliner over his shoulder and hauls it up an entire flight of stairs to his apartment—without even a wobble in his knees—thereby saving me the trouble of disposing of it.

###
After that, I collapsed into my new chair and squirmed for ten minutes bemoaning the fact it didn’t conform to my exhausted body before finally falling into a restless asleep. MN went to his own upstairs apartment (most likely on his hands and knees) to fall into his bed for a nap. MON tripped down the stairs from his apartment and whistled his way to his car to go do who knows what? Probably slay dragons and save old duffers from poorly planned physical activities.

Just wait. In fifteen or so years, you’ll read this post from an entirely different viewpoint than you are now. Let me know what you think  at dontravis21@gmail.com. Thanks for being readers.