How about that… two guest posts in two weeks. Does that mean I’m getting lazy? Probably not. When it comes to social media, I’ve always been lazy. At any rate, I asked another Albuquerque writer with Oklahoma roots to give us a little more of his New Mexico family saga, THE EAGLE’S CLAW, this week, and he complied with Chapter 2 of the book. In prior posts, the last one on December 7, 2015, Donald introduced us to Román Otero (who comes to be called Ro) and his grandmother, known as Cane-Woman. I continue to consider the old woman spooky, but her contemporaries are likely closer to the mark when they label her a witch. Chapter 2 introduces the other side of the equation, the Chandlers, a white family that owns a large ranch abutting the Edge of Mountain Apache Reservation where Ro and Cane-Woman live.

I recognize the post is longer than usual, but please see it to the end.
***** 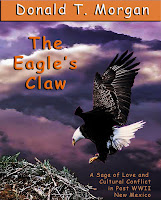 *****
I loudly proclaim my love and admiration for New Mexico, and the opening of this chapter paints a great picture of the grandeur and diversity of the state. Donald’s novel, THE EAGLE’S CLAW, is self-published as an Amazon Kindle book. I hope this prompted your interest enough to go buy his book. After all, without readers, we aren’t real authors. So keep on reading.

Feel free to contact me at  dontravis21@gmail.com. Donald can be reached at dtm1332@aol.com.