I recently asked another Albuquerque author if he would be interested in doing a guest post on this blog. As a result, this week my readers will get a look at Donald T. Morgan’s ebook novel THE EAGLE’S CLAW. CLAW is the telling of the intertwined stories of two young Apaches – one a mixed-blood and the other a pure-blood – as they grow up on a reservation. The two come at life from very different perspectives in south central New Mexico in the aftermath of World War II. The prologue of CLAW takes a rather unusual approach to introducing us to Román Otero, the book’s protagonist. Read on.
****** 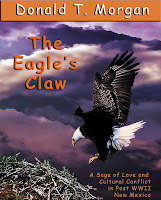 Sleep brought a restless dream. Rather, it was the stitching together of a memory by the boy’s subconscious from scraps collected and then forgotten over the years. There was a man in the dream, a tall Indah with brown hair and sad, gray eyes. A small, tawny woman with long, black hair and a beautiful smile was in it, as well. The izdan, well past school age, yearned to be able to read and write. The man, who taught at the Indian school, helped her learn. They were together often. They talked and laughed and grew toward one another.
They left the reservation and were married in the white man’s way. The woman often returned to her mother’s wickiup, but the schoolteacher never came. This was good because a man gazing upon his mother-in-law risked blindness. The young wife blossomed with health and happiness and child. Strength and pride replaced the longing in the man’s eyes.
One day, more Indah brought a rodeo to the reservation. The Tinneh loved a rodeo. It was great fun to watch the gaunt, pale men flop around on bucking horses. Some of the People rode, too. The crowd cheered when a cowboy rolled in the dust, no matter he was white or tribesman.
Then a hush fell over the stands. A magnificent roan pranced into the arena. A devil horse with fire-eyes and a black mane writhing like a nest of serpents. Its great hooves struck sparks from the earth.
No one could ride him, hooted the rodeo hands. No one ever had. No one ever would. They offered the bribe of money to any who succeeded. The Apache men stirred restlessly, but advised by diyi—the shamans among them—they refused the challenge even though the prize was hefty.
One man stepped forward. The white man with gray eyes. A teacher didn’t make much money, and he had a family on the way. He would claim the reward.
Death stalked the arena. Evil corrupted the air. The cowboys’ flesh turned green from it. The roan danced in savage glee. The smell of horse sweat and manure and hot dogs and dust hung heavy over the crowd. Invisible owls screeched. Whippoorwills cried, and coyotes cackled.
From the uneasy safety of his dream, the boy watched the man mount the haughty horse. The chute gate flew open. The roan shot out, bucking and whirling in a frenzy. The Indah rode him! He rode the wicked beast.
Enraged by the humiliation, the roan flung himself against the fence. The man was hurt. His fingers loosened. The animal twisted savagely, and the rider fell. The demon horse wheeled.
The woman with the beautiful smile ran into the arena, waving her arms to turn the frothy beast away. The horse charged on, driven insane by talons of monster owls buried in his withers.
The man was dead. The dreamer thought the woman was, too, but she moved. Her body strained in birth even as she died.
And he knew he had seen himself born.
*****

I have always been warned away from dream sequences to open a book, but I think this one works, don’t you? The novel weaves an interesting tale as it follows the orphaned Ro’s upbringing in an old-fashioned wickiup, overseen by a reclusive grandmother with the reputation of a witch. Jose Peyote, who thought himself emancipated through service in the US Marine Corps during the war, runs into another set of problems.

I hope you’ll be motivated to buy the Kindle book and read it for yourself.

As always, I’m interested in your reactions. Thanks for reading.