EITHER OR Results and Something for THE ZOZOBRA INCIDENT fans 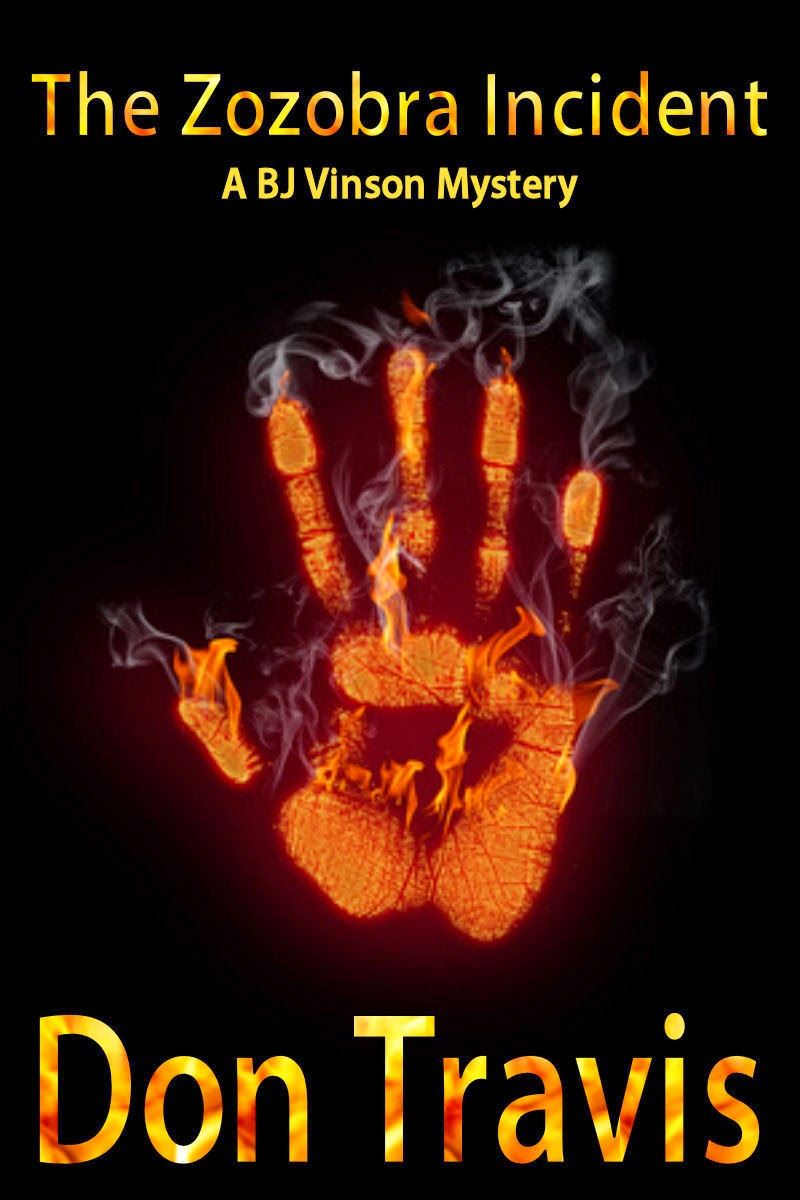 Last week’s post, EITHER OR, brought lots of page views but not so many responses. Don’t be shy. There’s still time to send me your endings.

Those that I have received seemed split pretty evenly. Roughly half had the protagonist turn left as he (or she) exited the Dagwood Sandwich Shop to follow the bold brunette with ruby red lips and intense stare, while roughly the same number had the character turn right and follow the blond hunk with laughing eyes. But that’s not as revealing as it seems, because some decided the narrator was male and others that she was female. That made for some interesting combinations, leading me to believe you readers are a rather complicated lot.

Send me some more endings at dontravis21@gmail.com!

This week, let’s take a brief peek at THE ZOZOBRA INCIDENT, which introduces Albuquerque Confidential Investigator, B. J. Vinson to readers, and hopefully makes fans of them all. In the following scene at the beginning of Chapter 12 (Page 113), BJ is frustrated by a rift with Paul Barton, a friendship he’s come to value. The break was caused by the fact Paul’s name keeps surfacing in the case, and BJ is eager to have the thing over and done with. He decides to revisit cashiered Marine Gunnery Sergeant Rory Tarleton, the man who printed copies of the racy photographs for Emilio Prada.

After a miserable night, I got up on the wrong side of grouchy, feeling empty, yet unable to face breakfast. I hungered for one of the Denver omelets Paul made so well. I wanted to watch him wake up. Talk to him. Laugh with him. Let him ask a thousand who-what-why questions about my life. I wanted him.
Moving as if I were underwater, I forced myself into the shower and mindlessly went about the routine of cleaning up. I needed to get some things done, but in deference to the fact I wasn’t fit for human contact, I steered clear of the office and started retracing my steps.
While picking up a single-use camera at the nearest drug store, I went surly with the clerk and was immediately contrite. My problems were not hers; doubtless she had enough of her own. I crawled back into the car and snapped twenty-four random shots on the way to the South Valley.
Rory Tarleton’s homestead was considerably tidier than on my first visit. No one answered my knock, and there was no sign of him in the darkroom at the rear of the place. I was just slipping back into the Impala when the roar of an engine caught my attention. Rory rolled down the road on a US Military Indian Motorcycle, complete with sidecar, and parked in the drive beside the old Toyota up on blocks. The antique motor stroked smoothly, a testament to his mechanical skills.
“You again,” he groused. “What you want this time?”
“What the fuck’s wrong with you?” I snarled. Then groping for an attitude change, I sighed and glanced around. “Looks like I did you a favor. The place looks a thousand percent better. Now if you’ll only get rid of that junker-car, the joint will look decent.”
“No way. That Toyota’ll run like a top when I get through. I’ll double my money on it.”
“Like you will with the bike? It’s new, isn’t it?” It wasn’t new, of course. It was probably a leftover from WWII.
He puffed up a little, and I figured that was as much pride as he would allow to show. “Yeah, just picked it up a few days ago. Didn’t take much work to get it purring. Whadda you want, anyway?”
I held out my camera. “The same deal you made Emilio. By the way, have you heard from him?”
He shook his head. “Not since them pictures. Same deal? Okay, for fifty bucks I develop, print, and forget them. I’ll let you know when they’re ready.”
“Nope. I’m gonna watch you work. Just like Emilio did.”
He shrugged, jiggling his beer belly. “Whatever. But I get paid up front.”
“No problem.” I peeled off some bills Del would eventually replace.
The next hour was devoted to staying out of Tarleton’s way in the cramped little shack behind the house. Even by the muted glare of the hazy red light he’d snapped on, I could see he wasn’t duplicating the negatives—if such a thing was even possible.
Tarleton was giving me funny glances by the time he draped the last print over an old-fashioned heat drum. He flipped on a sixty-watt bulb as the first photos peeled off the drier. Grabbing the first three, he shuffled through them before facing me with a bayonet in his hand.
“What the fuck’s going on, Vinson?”
“What do you mean?”
“Them pictures ain’t nothing. You coulda gone anywheres and got them done for ten bucks tops! How come you brought them here?”
“Wanted to watch you work.”
“You still looking for them dirties Emilio had?”
I nodded. “Trying to trace them from development to the blackmailer.”
He relaxed and buried the tip of the long bayonet in the wall beside his table. That was his stress reliever; the planking was pretty well splintered.
“You lied to me—about one thing, anyway.”
He wrapped his fist around the hilt of the knife. “About what?”
“About the way Emilio paid for your skills. You got an administrative separation from the Corps, didn’t you? And here you had me fooled by that kiddy porn with little girls.”
Anger suffused his heavy features, but he relaxed almost immediately. “Wasn’t fooling nobody. Sex is sex. ‘Sides, Emilio kinda looks like a girl if you squint your eyes. And he paid me the fifty, too—just like I said.” A foxy smile crawled across his lips. “So by rights, you still owe me.”
“In your dreams, Tarleton.”
He smirked. “That’s okay. Be kinda hard to take you for a girl. Besides, you’re too old for me.”
“You like twinks, huh?”

Our ex-gunnery sergeant is kind of a smarmy guy, huh? He’s just one of the gentler creatures BJ runs into while running a blackmailer-turned-killer to ground in ZOZOBRA.

Thanks for reading. Take a look around the blog site while you’re here.